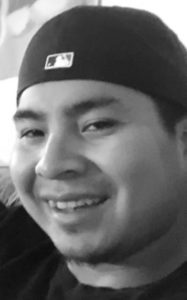 It is with great sadness that we the family announce the sudden passing of our beloved Husband, Son, Brother, Nephew, Uncle, BARRY (Bear) NATHAN CRYING HEAD-RABBIT on August 25, 2019 at the Lethbridge Regional Hospital.

He attended school at Lavern Elementary School, Kainai Middle School, St. Francis Jr. High, Kainai High School, where he received his high school diploma. Barry attended many trades programs where he received many certificates, he also received a Welding Trade Certificate. He also graduated in three programs called Life Management, Another Way Program, Beautification. Barry then pursued a career in Iron Works, he was employed with several companies like Walter in Calgary, AB and was recently employed with Flexahopper Plastics CTD in Lethbridge, Construction workers which involved working at U of L, Cavendish.

Barry’s passion was sports and he competed in many events such as; track and field, fastball and slow pitch. He traveled to many places with his sports such as; Pocatello, Idaho in 2004 with the Lethbridge Track Team representing Canada for an indoor track and field, in 2006 he also went to Denver, Colorado representing Team Alberta Indigenous Games throughout his high school years. Throughout his adult years he attended many Native Canadian Fastball Championship Tournaments, Provincial Fastball Tournaments while his team played in many leagues such as; Calgary Fastball Industrial League from 2008-2017. In 2013, he played Provincials and won a silver award in Irma, AB. and Native Fastball B Division Champs. His passion for fastball stems from his family, the Rabbit brothers, also known as the Lavern Blues and Crying Head brothers. Sluggers have been a team for 15 plus years – they started when Barry was about 15 years old. Our original 6 team members consist of Kristy, Dez, Joe, Mario, Matt and Barry. They started the team and have been together throughout the years,- players have come and gone and today Sluggers family includes Titus, Danielle, Carmen, Chelsea, Hank, Justin, Nico, Shawn, and Rhonda. Our right fielder (Barry) was a very confident player he never felt pressure in pressured games he did what he had to do defensively and offensively, playing together all these years we know each other inside and out to the point we call out each other’s plays, before it happens hence the time Barry was up to bat and Dez told some of the players “he’s gonna hit down third and say Aah”. Well that’s exactly what happened, Sluggers have always been loyal and confidant in each other, we just wanted to play, “you can say we’re family”.

Barry enjoyed spending time with family, especially camping and BBQ’s with mom and dad Martin & Crystal CR and family. Barry always brought his mansion along with him wherever he camped and loved all kinds of music. He was caring, loving, kind-hearted, outgoing, and overprotective of his loved ones, a peacemaker and got along with everyone, always making new friends welcoming everyone to his home and many loved to be around his presence.

Barry really loved his wife Alisha, never leaving her side, always encouraging her to try hard and making sure she was good, never left her out of any family gatherings, also did everything together. The only time they were apart is when they had business to do but other then that they had to always be with each other. His sister Vishura had nicknames for them like “Minne soup & Barry soup” Vizzy would call us”. Also, can’t forget about his children Lucy lou, Lukes, an Shiloh (Barry & Alisha dogs) he loved his dog Lukes very much and would call him “Barry Jr” or “his boy”. He really loved his other family just as much as he loved his. Barry love playing ball with his brothers (baseball) and basketball when he had the chance to; he also loved the outdoors like camping, fishing, boating, going on adventures, cruising and really loved his music of course.