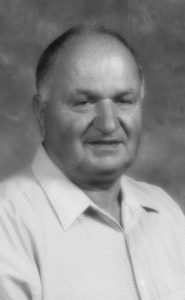 MILE “MIKE” PANIC was born in Gornji Furjan, Kordun, Croatia on October 10, 1935. He was predeceased by his father Ante and mother Jelena (Zgela); his sister Marica Halagic; brothers Jure, Franjo, and Josip all of Croatia.

His family in Canada are wife Marija (Verli) and children Maria Federmesser (Jim) and Michael (Cynthia). His niece Grozdana Crowe (Panic) and her family; Roger, Anton, and Goran reside in Calgary. His grandchildren are Melissa Federmesser and Ashley (Kuerschner); spouse Elijah, with his great-grandchildren Moses, Hollis, Harriet, and Iver.

Mile and Marija came to Canada in May 1961 settling in Coaldale, Alberta. Dad worked in his early days at Central Farms as a labourer and then took a position with the Canadian Pacific Railway laying new train tracks throughout southern Alberta. He worked, as a cement finisher, for several construction companies in Lethbridge from 1965 to his retirement in 1998.

Mile was also a very active member of St. Ambrose Parish in Coaldale. Throughout the many decades, dad, volunteered his time renovating the rectory, painting the church, replacing tiles in the grotto and taking care of some cement repairs; always happy to lend a hand for our Lord.

Dad loved life. He never stopped working. Always building, repairing and inventing; an engineer in his soul. He is now discussing with St. Peter how the Pearly Gates need to be upgraded and that he will get right on it with only the best and strongest materials. That’s our dad. Rest in Peace Tata.

One Condolence for “PANIC, Mile “Mike””