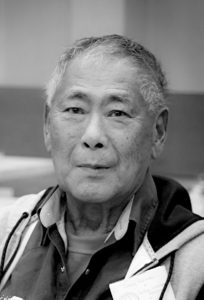 It is with sadness that we announce the passing of Gene Karaki in Lethbridge, Alberta on Monday, September 2, 2019 at the age of 78 years. Gene is survived by his brothers George (Geraldine), Gordon (Mihoko), Victor (Roxanne), sister-in-law Etsuko (Melvin), sisters Joy (Stewart) Lang, and Linda (Wayne) Finkbeiner. Uncle Gene is remembered fondly by his many nieces and nephews. Gene was pre-deceased by his parents Mitsuo and Sachie (Iwaasa) Karaki and brother Melvin. Gene was born April 1, 1941 in Raymond, Alberta. The family moved to Cassils, Alberta where he continued school there and in Rosemary, Alberta. He participated in many sports including football, basketball, boxing and judo. His career in the Alberta oil fields took him to many countries including Thailand, the Philippines, and the Baltic Sea in the Arctic. He retired to the Kootenay Lake area where he enjoyed fishing, quading and picking huckleberries. The Funeral will be held on Saturday, September 14, 2019 at 11:00 a.m. at The Church of Jesus Christ of Latter-day Saints NORTH SIDE CHAPEL (2223 6 Ave N, Lethbridge Alberta). Friends may meet the family from 10 to 10:45 a.m. prior to the service. In lieu of flowers, donations may be made to a charity of your choice. Koden is gratefully declined.

To send a condolence, please

One Condolence for “KARAKI, Gene”