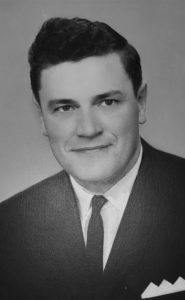 ADOLPH SASS, of Lethbridge, passed away at the Chinook Regional Hospital Monday, September 2, 2019 at the age of 84 years.

Adolph is the loving father of James (Janice) of Spruce Grove and Rhonda of Lethbridge. He is also survived by his sister Emma Kuehn, nephews Lawrence (Dianne and family) Kuehn and Leonard (Marlene and family) Sass.

He was predeceased by his wife Caroline (née Winter), parents Ludwig and Emily, brothers Freddie (Noreen) and Ferdinand.

Adolph was born in Morris, MB. He lived on the farm for many years until he moved to Winnipeg, where he met his bride Caroline. Adolph was a heavy equipment operator for the highway department in MB, AB and BC. He finished his employment with Safeway until his retirement.

Adolph had many passions in life including woodworking and fishing, which he shared with his son James.

Adolph moved in with his daughter Rhonda in the later years, where he was able to pass on his woodworking skills to her as well. He later moved into St. Therese, where he called his home for over five years and touched many lives of those who came in contact with him. He entertained them with his witty stories and beautiful music that he played on the harmonica and accordion. He will be greatly missed by all.

The family would like to thank the staff of St. Therese Villa for the years of care they so dedicatedly provided.

A Graveside Service will be held in Brooks at a later date.