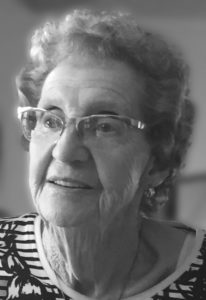 LEONA JULIA KINAHAN, beloved wife of the late Jack (Michael) Kinahan, of Coaldale, AB, passed away peacefully at the Chinook Regional Hospital on Wednesday, September 25, 2019 at the age of 89 years.

Besides her loving husband Jack Kinahan of 63 years, Leona is predeceased by her daughter Deborah “Debi”, her parents, three brothers, one sister and three of their spouses, her remaining sister’s husband, and Jack’s two brothers, two sisters and two of their spouses.

A Funeral Mass will be celebrated at OUR LADY OF THE ASSUMPTION CATHOLIC CHURCH, 2405 – 12 Avenue South, Lethbridge, AB, on Monday, September 30, 2019 at 10:00 A.M. with Father Kevin Tumback celebrating.

Leona will be laid to rest during a Private Family Interment at a later date.

In memory of Leona, donations may be made to a charity of your choice.