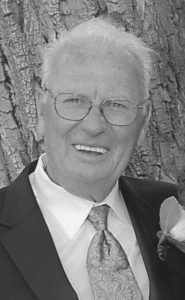 ALAN FREDERICK MACKAY, beloved husband of Evelyn MacKay, passed away peacefully at the Prairie Ridge Good Samaritans Society in Raymond, AB on Monday, October 7, 2019 at the age of 85 years.

He was predeceased by his parents, George & Alice MacKay, his older brother, Bill and Bill’s wife, Margaret. Also gone before him is his oldest son, Wesley MacKay, who passed away while on a peace time tour of duty with the Royal Canadian Airforce Snow Birds.

Alan was the second son born to George & Alice MacKay in Turner Valley, AB on February 11, 1934. He attended Mercury School and South Turner Valley High School in Royalties, AB. After his high school graduation in 1951, he enrolled in Electrical Technologies at the Provincial Institute of Technology & Art in Calgary, which he completed in 1954.

He met his beloved Evelyn at a dance hosted by the Institute, and the couple was married on August 10, 1955. Alan went on to work for Calgary Power after his schooling until 1958, at which point he and Evelyn moved back to her family’s farm. In 1964, he started again with Calgary Power—known as Transalta today—and worked there until his retirement in 1991.

Alan & Evelyn’s retirement years were spent traveling and doing the hobbies they enjoyed. For Alan, those hobbies were leather work, lapidary and wood carving—he excelled at all three. Alan’s last years were spent with Evelyn at Prairie Ridge Lodge in Raymond, AB.

Alan was known and loved by many and he will be sadly missed.

In lieu of flowers, donations to your local Alzheimer Society are gratefully appreciated.