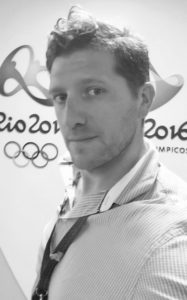 It is with heavy hearts and deep regret that we announce the passing of a strong, courageous young man stricken with cancer, and taken from his loved ones much too soon. Steven Frank Ferrero, aged 38, was born in Lethbridge, Alberta, but lived in San Juan, Argentina with his parents until the age of 3. His school years were in Lethbridge where he fell in love with sports. He was a natural athlete, excelling with enthusiasm at a variety of sports, particularly soccer and rugby. After graduating he moved to Edmonton where he continued his post-secondary education and broadened his skills through various work experiences. His passion for sports and his big generous heart, filled his life with solid friends and adventures. His multi-lingual skills led him to employment at the Rio Olympics in 2016. From there, a job offer landed him in Mendoza, Argentina. It was there that Steven’s fight with cancer came swiftly and punishingly. He fought fiercely as only a strong vibrant man could, but the disease advanced despite the prayers and hopes of his family and friends. Steven Frank Ferrero finally found rest in the arms of Jesus, on October 2nd in Mendoza, Argentina with his family at his side. He is survived by his loving mother Elizabeth Angela Ferrero, and his devoted brother Michael Enrique Ferrero, both of Calgary, Alberta. He is also survived by grieving aunts, uncles and cousins both in Alberta and in Argentina, and many friends scattered around the globe. Steven was predeceased by his father Mario Ferrero, as well as his maternal grandparents Cecilia and Frank Kaplan, and paternal grandparents Hilda and Mario Ferrero. Steven will be treasured in the hearts of those he touched, forever. As we sorrow in his leaving, we rejoice that he is in Paradise. Funeral mass will be held at Our Lady of Assumption Church on Saturday, October 19, 2019, at 11:00 A.M.

Leave a Condolence for Janet spiess