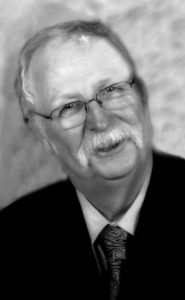 James (Jim) Edward Goodsell passed away surrounded by family after a lengthy illness on October 8, 2019, at the age of 71 years old in Lethbridge Alberta. Jim was born on November 29, 1947 in Comox British Columbia. He grew up in the area and served in the Canadian Navy for four years as a young man. He moved to Lethbridge in 1969 where he worked various jobs before becoming a Transit operator for the City of Lethbridge in 1975. He was an active member of the union and always stood up for what he believed to be best for his co-workers and himself. He retired from this position 37 years later in 2012. James is survived by his loving wife of 37 years Catherine Goodsell; sons Jason (Michele) Goodsell, Edward (Amara) Goodsell, Robert (Cari-Jo) Goodsell; daughter Roberta Clarke; five grandchildren, Albert Goodsell, Emily Goodsell, Cheyenne Clarke, David Goodsell, and Ryden Goodsell; sisters Sandra Strickland, Marianna (Ron) Hofmeister; brothers Denis (Anita) Thran, Mike Thran, many nieces and nephews and his mother in law Mary Roberts. He is predeceased by his father George Edward Goodsell (1950); mother Ruby Jane Thran (1988); his brother in-law Ernie Strickland (2009), and his father in-law Alan Roberts (2001). Family and friends are invited to pay their respects between 10:00am to 11:00am, on Friday, October 18, 2019, at the MARTIN BROTHERS RIVERVIEW CHAPEL, 610 4 Street South. A Funeral Service will be held at 11:00am, on Friday, October 18, 2019, at the MARTIN BROTHERS RIVERVIEW CHAPEL, 610 4 Street South, Lethbridge, Alberta. Interment will follow in the Royal View Memorial Cemetery, 5920 13 Street North. Flowers are gratefully declined. For those who wish, memorial donations may be made to the Canadian Cancer Society, 200, 325 Manning Rd NE, Calgary, AB, T2E 2P5, or the Canadian Lung Association, 885 Meadowlands Dr., Suite 502, Ottawa, ON, K2C 3N2.