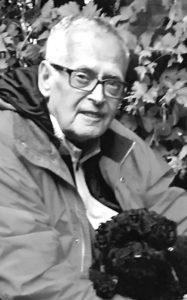 Adriaan passed away peacefully at home in the evening of September 20, following a brief illness of only a few weeks. We mourn the passing, too early, of a wonderful partner, brother, uncle, and most importantly, friend, to all who knew him.

Adriaan was born April 23, 1943, in the midst of Nazi occupied Europe. The family home was destroyed by flooding by German forces in 1944 and flooding by natural disaster, February 1, 1953.

Our family emigrated to Lethbridge in the summer of 1953.

Adriaan did the remainder of his schooling in Lethbridge. At the age of 17, Adriaan joined the Canadian Imperial Bank of Commerce in Lethbridge and his career was entirely with the CIBC. His final position with CIBC, and his longest posting, was as manager of the Inglewood branch in South East Calgary.

Adriaan’s banking career was his life’s main mission. Adriaan not only had the extensive knowledge to serve his customers well, but also had the gift of transforming his customers into friends and many into close friends.

Adriaan’s community service extended to being a member of the Lions Club and being a church treasurer at a number of churches where he lived, acting on the legacy of faith inherited from Mom and Dad.

In his retirement Adriaan moved to Nanaimo, British Columbia, spending his last 12 years there.

Despite struggling with progressive disability with multiple sclerosis in the latter decades of his life, Adriaan continued to work actively.

Adriaan’s urn will be interred at the grave site of his parents, Floris and Martina van Westenbrugge, at Archmount Cemetery in West Lethbridge – 2650 Westside Drive – on Saturday, October 19, 2019, at 1:30 PM with a brief graveside remembrance.

All friends and family are cordially invited to attend. Coffee and light refreshments will be served.

We would greatly appreciate any and all friends and family who would like to submit remembrances of Adriaan by way of stories and/or pictures. Please send them to jvanwest@yahoo.com and a future compilation will be made available to friends and family.

In lieu of flowers or any other gifts, the family requests that contributions be made in Adriaan’s name to the Multiple Sclerosis Society of Canada.