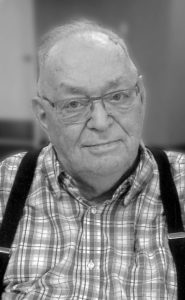 THOMAS “TOM” R. NAGY passed away peacefully at St. Michael’s Health Centre on Tuesday, October 22, 2019 at the age of 88 years.

Tom is survived by his son, Dirk (Janice) Nagy, his daughter, Karen Olson and his many grandchildren, great- grandchildren, cousins and extended family.

He was predeceased by his wife, Louise, his parents, Steve & Mae, his brother, Ronald and his son, Eric.

Tom was born on October 4, 1931 in Chicago, IL. He was a man who lived life his way; at times unconventional, but always with passion. At a young age, he moved from Chicago to Harmon Valley, AB where he worked on the family farm and created numerous lifelong friendships.

He married Louise at the age of 44 years and cared for her three children as his own—something that positively impacted him beyond expectation. As a father, grandfather, great-grandfather, cousin and friend, Tom’s understated love for his family created many undeniable bonds which remained evident until his peaceful passing.

Our tears still flow in appreciation for the unconditional love he provided and the void that now exists in our lives. A life so very well lived.

At Tom’s request, there will be no formal funeral service. In lieu of flowers, donations can be made to a local charity of one’s choice.