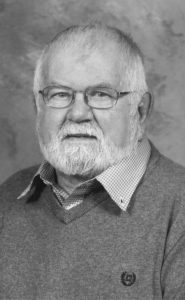 MICHAEL EDWARD FORESTELL, of Lethbridge, passed away peacefully at home on Friday, October 25, 2019 at the age of 93 years.

Dad leaves behind seven children: Paul of Vulcan, Clair (Elaine) of Lethbridge, Brian of Didsbury, Patricia Siray (Brian) of Millarville, Mary Jane (Katryn) of Halfmoon Bay, Michele Coddington (Matt) of Sonoma and Sean (Isabelle) of Newburyport. He is also survived by 15 grandchildren and 14 great- grandchildren who all fondly remember their Opa.

Growing up in Coniston during the Depression and World War II definitely had its challenges. Dad worked part time in the INCO mines as did nearly all the men in the community. During the war, he lost three older brothers who served in the military and a younger brother due to illness. When he was old enough to serve, Dad took a different path and went to study in the seminary at the University of Western Ontario in London.

After departing from the seminary, Michael’s friend Roman Mann invited him out to the farm in Saskatchewan to work for the summer. At the farm, Dad met the love of his life, Gunda. They were married in 1950 in Saskatoon where Paul was born, and later moved to southern Ontario where Clair, Brian and Patricia were born and Dad worked for Firestone and RCA Records. In 1958, the growing family moved to Lethbridge where Mary Jane, Michele and Sean were born, and Dad started working for the Sisters of St. Martha at St. Michael’s Hospital.

In 1986, after 28 years at St. Michael’s as the Director of Finance, Dad retired. In his retirement, he continued to give back, to the community and could be found volunteering at the soup kitchen or using his finance background to take care of the books for the church. It was also a chance for Dad to satisfy his sense of adventure and interest in the world as he travelled across the country in a VW camper, and made his way to Scotland, France, Italy, Austria, Germany and Alaska to name a few.

Dad was well loved and will be missed by all who crossed his early journey. We will all remember him as a loving husband and father, his humble nature, his sense of humour, his love of travel, his love for books, his delight in playing crib with his grandchildren and his love for sharing good food and martinis with family and friends. We miss you Dad, but we’re grateful to have had such a wonderful and loving father and will always hold you in our hearts.

In lieu of flowers, donations may be made in memory of Michael to the Covenant House Vancouver, 1302 Seymour Street, Vancouver, BC V6B 3P3 or online at covenanthousebc.org.

One Condolence for “FORESTELL, Michael”