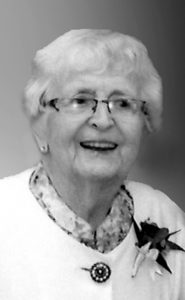 “But those who hope in the LORD will renew their strength. They will soar on wings like eagles; they will run and not grow weary they will walk and not be faint.” Isaiah 40:31

DIANA (DINY) HUMMEL (nee MOES), beloved wife, mother, grandma and great grandma, went to be with her Lord and Savior on Wednesday, October 30, 2019 at the age of 89 years. Diny was born April 9, 1930 at home in Zuidwolde, Drenthe, the Netherlands. As a young girl and teenager, she worked on the family farm milking cows and helping with chores during the Second World War. In 1950, she sailed across the Atlantic Ocean with the Guichelaar family and worked as their nanny. When this family returned to Holland a year later, Diny stayed in Canada and worked as a housekeeper for the Lyons family in Barons. She was an avid seamstress and enjoyed knitting and crocheting; donating many of her hand-made items to various charities including Blankets for Canada and Immanuel Christian Schools. Diny married Willem (Bill) Hummel, her childhood sweetheart on May 17, 1951. Together they raised seven children on the family farm near Nobleford and worked side by side for many years. Diny is survived by her loving husband Bill of 68 years, children Lucas (Lamkje) and their children Jeremy (Kristi), Daniel (Moira), Joel (Rachel), Karla, Elizabeth (Justin) Den Toom and Emily (Kelsey) Bolink; Albert (Ellen) and their children Christopher (Lindsay), Edward (Mandy), Jodi (James Ebrey) and Andrew (Jessica); son-in-law Martin Meindertsma and children David (Vala) Meindertsma and Jolene (Robert) Lawrence; William; Bryan (Wendy) and their children Rachel and Mikaela; Jim (Carol) and their children Ainsley and Kaitlyn; and Tim (Benita) and their children Dayna (Nick) Hawkeye, Jaime (Taylen) Oancia, Michael (Sianna) and Matthew. As well as, 26 great grandchildren in whom she found great joy and pleasure. She is also survived by in-laws Roeli Moes of Edmonton, Joyce Moes of Westlock, Alice Moes of Calgary, Case and Tita Hummel of Diamond City, Lucas and Susan Hummel of Nobleford, Roelof Hummel of the Netherlands and many nieces and nephews in Canada, The United States and Holland. She was pre-deceased by her son Quincy, daughter Wilma Meindertsma, great-granddaughter Makenna Meindertsma, her parents and many brothers, sisters and in-laws. A Memorial Service will be held at 11:00am on Wednesday, November 6, 2019 at the Nobleford Christian Reformed Church, 522 Highway Avenue – Nobleford, Alberta. In lieu of flowers, donations can be made to Immanuel Christian Schools – Society for Christian Education in Southern Alberta, 802 – 6 Avenue, North, Lethbridge, AB T1H 0S1 – www.societyforchristianeducation.org, the Alberta Heart and Stroke Foundation, 1011 – 2 Avenue South, Lethbridge AB T1J 0C8 – www.heartandstroke.ca or the Canadian Cancer Society, 317 – 10 Street, South, Lethbridge, AB T1J 2M7 – www.cancer.ca