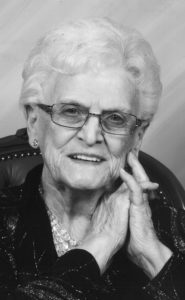 SUSAN LOUISE SPITZER (née Messmer), beloved wife of the late Walter Spitzer, passed away at St. Michael’s Health Centre due to complications from a stroke on Thursday, October 31, 2019 at the age of 92 years.

Besides her loving husband Walter, Susan was predeceased by her daughter Loralie, parents Michael and Barbara, sisters Litvena Peters and Mary Tittle, four brothers Dominick, Leo, Lawrence and Alphonse Messmer and many sisters and brothers-in-law.

Susan was born in Senate, Saskatchewan on January 28, 1927 to Michael and Barbara Messmer. She was the sixth of nine children and attended elementary school in Senate and Consul, completing Grade 12 in Foremost, Alberta. After her schooling, she began working as an uncertified nursing aid at St. Michael’s Hospital in Lethbridge. She met her future husband Walter at a dance and they were married on October 28, 1946. They had celebrated 52 years together before Walter passed on September 11, 1999.

Susan and Walter settled in north Lethbridge and raised five children. Susan worked various places, including Crystal Dairy, Canadian Imperial Bank of Commerce, Canada Safeway, and when Walter suffered a brain aneurysm in 1970, she went back to school, taking Secretarial Training at Henderson Business College. After college, she was employed at Empress Foods, working for 11 years. She retired to spend more time with Walter camping, fishing and travelling (Las Vegas and Wendover) before Walter became wheelchair bound. They sold the house in 1999 and moved to Grandview Condominiums. In 2012 when Susan felt she needed more assistance with daily living, she moved to Black Rock Terrace where she made many new friends.

Susan was a devout Catholic and a life member of the CWL. She was a terrific cook and could make the food stretch to feed all the hungry mouths at the supper table. She’ll be remembered for her spudnuts, cream puffs, cottage cheese perogies, and goose with rice dressing. In the winter she even enjoyed barbequing hamburgers on the deck for their poodle Benji. Susan loved to shoot darts and won many trophies. She always had a Harlequin book on her end table and loved to play crib and bingo with her friends at Blackrock. Fridays became her favorite day as her daughter Barb would pick her up from her apartment and they’d do shopping, lunch, and trips to the casino. Having her nails professionally done was also a highlight of Susan’s month. She loved being pampered.

The family would like to thank the health professionals at Chinook Regional Hospital, Milk River Long Term Care and St. Michael’s Health Centre Long Term Care for making Mom comfortable over the past nine months. We are forever grateful for the kindness shown to her.

For those who wish, memorial donations may be made to the M.S. Society, 724 – 13 Street North, Lethbridge, T1H 2T1 or to the charity of your choice.