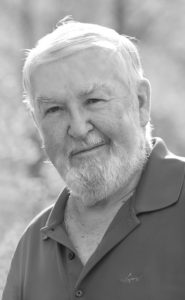 STEWART GERALD GILBORN, born March 23, 1942, passed away at the Chinook Regional Hospital in Lethbridge on Nov 2, 2019 after a lengthy battle with cancer.

He was predeceased by his wife Gayla, son Layne, parents Dan and Eva.

My feisty father lived a full life, married 52 years to his greatest love, Gayla. When mom passed away in 2016, this left an unimaginable and at times unbearable hole in his heart. Friends and family visiting was his salvation. He had many lasting, loyal friendships, people who kept in touch over time and great distances as he was a great conversationalist, with endless funny sayings and stories we will always cherish.

Dad was an avid sports guy; fastball, fishing, and curling kept him active and connected socially. Summers were meant for camping with extended family, Lake 5 being a favorite. Golfing in Palm Springs provided a winter break. He reminisced often about his basketball days growing up in Coutts; perhaps this is why he chose a career teaching Phys Ed, leaving a better paying job at Lethbridge Brewery to return to University. Supporting his young wife and two children while at school fulltime, was not easy. His work ethic and commitment to both: admirable.

His teaching career spanned 31 years, with many moves and a final stint at University to get his Masters, settling in Brooks in 1979 as Principal of the new Griffin Park School. Our home was the focus of many staff parties and family get-togethers; he could whip up an excellent prime rib and French onion soup! He had a huge heart when it came to youth, none being more important than his own children and later grandchildren. Griffin Park became the hub of fundraising efforts for the Children’s Dreams Foundation. He was so proud of Brooks and the surrounding community for their generous support of these auctions. Always community-minded, Dad was a long time Kinsmen member, serving on City Council and – from the look of his resume – Chaired and Directed everything. He supported many local fundraisers, especially Ducks Unlimited, as he loved pheasant hunting.

Dad retired from teaching in 2000, working alongside his son Layne in house construction until relocating to Lethbridge; a move for Mom, he would say. As he slowed down, reading a book a day was not uncommon, but he always preferred a phone call or visit and looked forward to outings and company. Not one to mince words, ferociously independent to the end, and steadfast in his beliefs, he respected integrity and intelligence. He believed in giving back and pulling one’s weight. To a life well-lived, Dad – Rest easy.

A family service will be held on November 18 in Lethbridge. In lieu of flowers, dad would love it if you helped a child in need or, donations to Canadian Cancer Society, 317 – 10th St. South Lethbridge, AB T1J 2M7 – http://www.cancer.ca, would be appreciated.