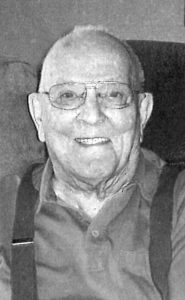 We regret to announce the death of William Reed Erickson of Lethbridge, Alberta, on November 23, 2019, in Taber Alberta. He was 96 years of age at the time of his passing. He is survived by his son Ross Erickson of Boise Idaho, and daughters Jan Mason (Mark) of Austin Texas and Val Walker (Keith) of Medicine Hat Alberta. Reed had 14 grandchildren and many great- grandchildren. He was predeceased by his wife Doris and his oldest son Brian. Reed was one of eight children born to Alif Dehlin and Ruby Stevens Erickson. He was born just outside of Raymond, Alberta, but spent most of his childhood and youth in Stirling. He is survived by his youngest sister, Roberta. He completed teacher training and his Bachelor of Education at the University of Alberta in Edmonton, and a Master’s Degree at the University of Montana at Missoula. He met his wife-to-be, Doris, in Raymond, and moved early in their married life to Lethbridge. A teacher and school administrator in Lethbridge and Southern Alberta for all his working life, Reed was also in many respects the “parent” of countless young men and women who were his students and responsibility at school. He taught first at a single-room school at Manyberries, then in Raymond, and, finally, for many years at Hamilton Junior High School and the Lethbridge Collegiate Institute. He concluded his professional career as the Principal of the LCI. It was rare to go out in Lethbridge without meeting someone who had been influenced by him or had been his student. He was held in the highest regard by all who knew him as a teacher. As a youth and young adult, Reed was a consummate athlete—excelling in basketball and baseball. He was a starter for the University of Alberta Golden Bears in his college years. Reed also loved music. A gifted saxophonist, he was a member for many years of various dance bands which performed around Southern Alberta, more particularly the Ernie Block Orchestra. At various times he was also an avid curler, fisherman and loved to watch high school sports. With several of his brothers, he served in the Royal Canadian Air Force during World War II, spending most of his enlistment as a Flying Officer. He was the recipient of several medals for his armed forces service. Reed was a life-long member of The Church of Jesus Christ of Latter-day Saints. He served in many capacities including choir director, scoutmaster, teacher, Bishop and as a member of the Lethbridge East Stake Presidency. He and his wife, Doris, served a mission in the Manila Philippines Temple and, for many years, were workers in the Alberta Temple in Cardston. He was a wonderful husband and father, always caring and considerate of his wife, Doris, and involved in the lives of his children. He was a fantastic grandfather, so much so that more than a few grandsons and great-grandsons bear one or the other of his names. In the summer of 2006 Reed and Doris moved to Martha’s House, leaving their home of more than 55 years. After Doris’ passing and as his health declined, Reed moved to Linden View in Taber, Alberta. Reed was proud of all his children but particularly close to Val in the later years of his life as she placed his care and well-being as a priority in her life. He was a loving man who delighted in his family. He was a great example for all who were lucky enough to know him. We will always miss his amazing memory and sharp wit. Funeral services will take place at 11 a.m., on Monday, December 2, 2019 at Christensen Salmon Generations Funeral Home, 703-13th St. North, Lethbridge Alberta. Friends may meet with the family at the funeral home on Sunday, December 2 from 7:00 – 8:00 p.m. or Monday December 1 from 10:00 – 10:45 a.m. prior to the service.