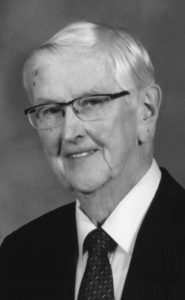 MEL McALLINDON passed away on Monday, November 25, 2019 at St. Michael’s Palliative Care Centre after a long battle with cancer, surpassing all timelines given to him.

He was predeceased by his siblings, Ed, Kathleen, Robert, Veronica, Rita, Patricia and Joan.

Mel received his B.Sc. and M.Sc. from the University of Windsor majoring in Physics and Chemistry, and received his teaching certificate from the Ontario Teachers’ College. He spent the first three years of his teaching career in Nigeria where he taught Physics and married his soulmate, Helen. Three years later, Mel received a posting to Uganda with Canadian International Development Agency where he taught Physics for another three years; however, political disruption brought the family back to Canada.

After spending a year at the University of Alberta to finish his B.Ed., Mel accepted a position at Catholic Central High School in 1973 where he taught mostly Physics for the next 32 years. He organized graduation events, coached badminton and served as timekeeper at football games for many years. He was instrumental in establishing Holy Spirit ATA Local #5 and served as its first president for many years. When a new parish was given the go-ahead for West Lethbridge, he was involved in negotiating the land swap for the site of St. Martha’s Church and the arrangement with the dental clinic that now shares the property. That facilitated fundraising efforts and the new church opened in 1994. He also served as the chair of its first parish council for a number of years until ill health caused him to reduce his activities.

Retirement meant more time to spend on sports activities. There was continuous rivalry with the older grandkids on the golf course, ski hill, tennis court and bowling alley. Papa spent many hours with the younger grandkids in swimming pools, and playing board games, Uno, and mini sticks in the hallways and the driveway. He also enjoyed many wonderful travel adventures, many of them with travelling companions, the Muellers, covering much of the USA and Europe, the Panama Canal, Lebanon, Jordan, the Baltic countries, and New Zealand.