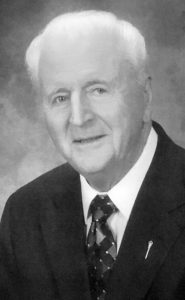 The family of Jack W. Ady are saddened to announce his passing on Nov. 26, 2019, at the age of 87 years. The son of George Ady and Catherine Dunn, Jack was the youngest of 8 children. He was raised on the farm in the Taylorville and Whiskey Gap areas. He married his sweetheart, Darlene Pilling, in 1954, had 4 sons and 1 daughter and lived in Edmonton, Calgary, Dayton Valley, Winnipeg, Hill Spring and Cardston. He worked in oil field service industry until 1975 when he returned to his rural roots and bought a mixed farm and ranch near Hillspring. In 1986 he was elected MLA for the Cardston Constituency, and was reelected twice more. In 1992 he was appointed Minister of Advanced Education and Career Development in the Klein government, a position he held until his retirement. He was appointed Chairman of the Chinook Health Region in 2000 and later to the Alberta Health Super-board where he served until his retirement from public life. As a tribute to Jack for his many years of public service, the Cancer Treatment Centre at the Lethbridge Regional Hospital bears his name. Jack was a lifelong faithful member of the Church of Jesus Christ of Latter-Day Saints, serving in many capacities, including working for many years in the Cardston Temple. He spent his life in humble devotion to his Saviour. Jack was a man of integrity and vision. He worked tirelessly in whatever job or assignment he was given. He set for us an example of commitment to family, church and community. Jack leaves to mourn Darlene, his wife of 65 years, sons Don (Cindy), Doug (Karen), John (Yvonne), Rob (Carry) and daughter Lori (Eric Brooks); 26 grandchildren and 38 great-grandchildren. The funeral service will be held Saturday, November 30, 2019 at 11:00 am at the Cardston Stake Centre, 338 5a Ave E, Cardston, AB. Friends may meet the family from 10-10:45 prior to the service.