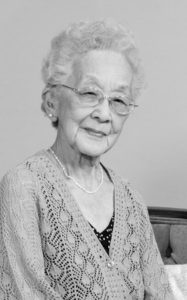 Toshiko’s parents, Takejiro and Isa Koyata, immigrated to Alberta from Japan in the early 1900s and homesteaded along the Milk River Ridge south of Raymond, Alberta. Toshiko was born there, the oldest of nine Koyata children. She attended public school at Mammoth, at two-room school on the prairies. In later years she completed her high school education.

When Toshiko was 17 she was working as a cook for a threshing crew when one of the young workers caught her eye. That young man, Genye “Gene” Tanaka, would become her husband and partner for life. They were married and raised six children. In the early 1960s the Tanakas moved to Lethbridge and Toshiko joined the urban workforce. She became a diet clerk with the Lethbridge Municipal Hospital, a position she held until her retirement.

Growing up when the western prairies were still new, Toshiko developed an independent and optimistic spirit, traits she held all her life and something she tried to pass on to her children. As a child of Japanese immigrants, she always managed to hold in perfect balance her love of Canadian lifestyle and her respect for Japanese traditions. For many years she demonstrated a little-known Japanese artform called bonseki (sand painting) during Heritage Days and at the Nikka Yuko Japanese Garden, she performed traditional Japanese dancing and was a member of the Momiji Dance Group in Lethbridge, and created Japanese flower arrangements (Ikebana) for the Nikka Yuko pavilion for many years.

Toshiko was a member of the Southern Alberta Writers’ Workshop in the 1990s and her stories of life on the prairies appear in the published volume Prairie Patchwork Two. She also wrote a series of articles on the life of Japanese-Canadians in southern Alberta for Toronto-based Japanese Canadian newspapers. She was also on the organizing committee for Nishiki, a book documenting the history of the Japanese-Canadian experience in Southern Alberta.

Funeral Services will be held Friday December 6, 2019 at 11:00 am at the BUDDHIST TEMPLE OF SOUTHERN ALBERTA, with family visitation beginning at 10:00 am. Koden is respectfully declined.

Toshiko’s family would like to thank everyone at Garden View Lodge for making her final years rich, comfortable and safe. They would also like to thank the staff in 4C wing at Chinook Regional Hospital and St. Michael’s Health Centre for their kindness during Toshiko’s last few days; and to Salmon and Sons Funeral Home for their help in making final arrangements.