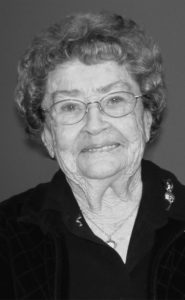 EMILY MARY HENDERSON, beloved wife of the late John Paul Henderson of Lethbridge, passed away peacefully at the Edith Cavell Care Centre on Sunday, December 1, 2019 at the age of 104 years.

Emily was born in Hardieville on March 2, 1915 to Fred and Rosalie Trehub. Her family later moved to Coutts, where she met her husband John. They were married on March 12, 1940. In 1951, they settled in Lethbridge where they raised their family.

Emily volunteered for many years at Catholic Charities Clothes Bank where she walked to work in all seasons in order to help the needy. She was a long time member of the Assumption C.W.L. Emily was a very prayerful woman with a deep love of God.

A Funeral Mass will be celebrated at OUR LADY OF THE ASSUMPTION CATHOLIC CHURCH, 2405 – 12 Avenue South, Lethbridge, AB, on Monday, December 9, 2019 at 11:00 A.M. with Father Albert Sayson celebrating.