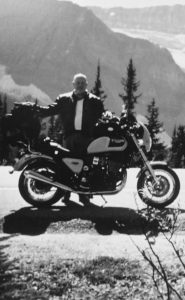 BRYAN ANDREW NOBLE, beloved husband of Carol Noble, of Nobleford, passed away at home, on Sunday, December 1, 2019 at the age of 68 years.

It has been a great joy to be with Bryan in the playground of life.

Bryan was born July 1, 1951 in Lethbridge AB, to his beloved parents Lillian and Gerald Noble, the youngest sibling of Eleanor Lind and Charles Noble, who were not only family but lifelong friends and trusted confidants.

Bryan and Carol, the love of his life, met at 14 years of age and journeyed throughout this lifetime together. Side by side they traveled Mexico in a VW van, through the Rocky Mountains on his Triumph motorcycles, and on foot in Waterton Lakes National Park and the West Coast Trail.

In the late 1970’s in pursuit of higher education, he moved to Vancouver BC where he received an Honours English degree from Simon Fraser University. He had a vast understanding of Greek mythology, Irish playwrights, German poets and a lifelong interest in literature.

After receiving his degree, he moved back to Alberta and chose to begin a career in farming on the land that he and his brother Charles purchased east of Barons AB. Inheriting a passion for farming and conservation of the land from his grandfather and father, Bryan practiced continuous cropping and zero tillage for over 30 years.

Bryan’s love for and pride in his children was unquestionable and always clearly expressed. This love and pride were reciprocated by his children Jayne Baun (Justin), Andrea Noble and Michael Noble (Jessica) and grandchildren Betty Baun, Bowin Baun and Pace Noble. Pets, especially dogs, were also considered an important part of the family. Bryan never met a dog he didn’t like.

Sports and fitness played a huge role in Bryan’s life. He played baseball, hockey, basketball, skied, hiked, weight lifted and ran. He coached little league baseball in Barons and shared this love of sports with the youth. Ever the proponent for the underdog he was a faithful lifelong Toronto Maple Leafs fan. Go Leafs Go!

Bryan loved to ride his motorcycles, especially enjoying annual rides with friends and family at Nelson’s Triumph Rat Raid where he was proud to be accepted as a member of the “Blue Meanies International”.

Bryan was excited for the future, collecting British motorcycles from the past and planning new adventures with Carol, joyfully mentoring the next generation as they took leadership roles on the farm, and continuing his ever supportive role as the lives of his children and grandchildren unfolded.

His legacy will be the seeds of kindness he sowed that will now germinate and expand into a bountiful eternal harvest of love in all our hearts.

In lieu of flowers, donations may be made to Hockey 4 Youth (https://hockey4youth.org/donate)