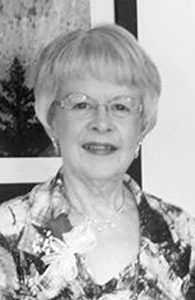 It is with regret and sadness that we announce the passing of Peggy Anne (nee FRY) Takashima, dearly beloved wife of George Masazo Takashima, at St. Michael’s Palliative Care Unit on Saturday, December 7, 2019, at the age of 78 years. Besides her loving husband George, Peggy is survived by her daughters Cheryl (Paul) Lenthall, Arlene (Joe) Yakielashek and son Raymond (Yvette) Takashima; eight grandchildren, Robyn (Richard) Miller, Kyle Knodel and Graham Lenthall, Brendan and Kayla Yakielashek, Chandra (Duncan), Jessie-Rae, and Kiernan Takashima; and two great grandchildren Ethan and Kataleya. She is also survived by one brother, John Fry, a nephew and three nieces. Peggy Anne was born in Holland, MB, to the late Shirley and Clifford Fry. She grew up in Holland and Winnipeg, MB. After graduating from Churchill High School in Winnipeg, she went to work at London Life Insurance Co. When she moved to Pinawa, MB, she was secretary to the reactor engineers at Whiteshell Nuclear Research Establishment. She worked in law firms in The Pas, MB, and in Pembroke, ON. She partnered with a good friend of hers and opened and ran Grampa John’s Drive Inn in Winnipegosis, MB. While living in Yorkton, SK, she was manager of the Yorkton Tourism Association. In Brandon, MB, she worked as a paraoptometric assistant. Peggy was a quick learner and put her whole mind to learning new things. Peggy enjoyed socializing with her friends – old and new alike. She enjoyed curling, golfing, and taking walks hither and yon. She enjoyed playing bridge and was active in several bridge groups in Manitoba and Saskatchewan. Peggy loved to travel and made two trips to Europe and several to Japan. She enjoyed hosting Japanese female students who came to Lethbridge to study at the college and university. Wherever she lived – in ten communities across the prairie provinces and Ontario – she was deeply involved in the life and work of each community. In the past twenty-five years living in Lethbridge, she became involved in numerous community organizations, including Friends of the Library and the Lethbridge Branch of Blankets for Canada. In particular, she was highly involved in Lions Clubs International – over fifty years as an active Lion. At the time of her passing, she was active in the West Lethbridge Lions Club. Church and faith meant a lot to Peggy. She was active in the Southern AB Japanese United Church in Lethbridge. Over the years, she was deeply involved in the life and work of the church at the Presbytery and Conference levels in the three prairie provinces. When Peggy committed herself to work on a committee, she was right in there and tackled the various issues that may arise in committee work. She spent many years on the Waterton Lake United Church Camp Board and served as treasurer for a few years. We will miss her presence among us. She kept the family together and was always ready to share her wisdom and understanding on a variety of issues and topics. May our Lord and Saviour be with her and with the family members. Rest in peace, Peggy. A Memorial Service will be held at 11:00 am on Thursday, December 12, 2019, at the ITALIAN CANADIAN CULTURAL CENTRE, 1511 St. Edward Blvd North, Lethbridge, Alberta, with Pastor Eva Stanley officiating. Flowers are gratefully declined. For those who wish, memorial donations may be made to the Southern AB Japanese United Church, 821-9 Street North, Lethbridge, Alberta, or to the West Lethbridge Lions Club, 2808 5 Avenue North, Lethbridge, Alberta. Cremation has been entrusted to Martin Brothers Funeral Chapels.

One Condolence for “TAKASHIMA, Peggy”