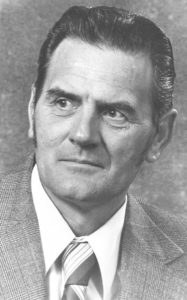 HENRY DALE LOWRY, passed away peacefully on Thursday, December 5, 2019 in Cardston AB, just one day after his 91st birthday.

Dale was born the second son, of Nathan (Nate) and Mary Lowry in Cardston AB, on December 4, 1928. He met his sweetheart, Arlene Passey, in Calgary while they were both going to school and were later married on June 30, 1949. Together they had 6 children. Dale and Arlene started their life together on a homestead in Taylorville and over the course of their lives together, lived in several places all over Alberta. Dale worked for Calgary Power, later changed to TransAlta, in various capacities. He ended his career back in Cardston, where he served as manager. While in Cardston, he served as a Town Councillor, and volunteered on several committees and boards, including the Temple Rededication, Friends of the Remington Carriage Centre, Kimball Park Improvement, and Cardston Historic Society. In 1990, Dale had the opportunity to drive the carriage that carried Queen Elizabeth II at Spruce Meadows during her royal visit. He was named Citizen of the Year in 2007 in honour of his many contributions to the community. Dale’s family has now grown to 164 members and continues to increase. Dale’s years of service to his family and community have been one of his greatest joys and sources of accomplishment in his life. He has been a devoted son, brother, uncle, husband, father, grandfather, great grandfather and great-great grandfather. He has served faithfully in several callings in The Church of Jesus Christ of Latter-day Saints and has always put the needs of others before himself. Dale will be remembered as a kind hearted and selfless man. His pure and unconditional love knew no bounds and has truly been an example of good to those that knew him. Dale was predeceased by his parents and siblings; Edwin, Wallace, Nathan Harold, Lawrence Jay, James Nelson, Donald Dee, his loving wife Arlene, just two weeks shy of their 62nd anniversary, second wife Maxine Easthope, son-in-law Michael Livingstone, great grandchildren; Devon Livingstone, Honey Mary Hunt and great-great grandchild Miles Scroggins. He is survived by his siblings; Allan, Barbara Rands and David and his children; Linda (John) Livingstone, Debra (Blair) Layton, Jayne Livingstone, Ginny (Rick) Williams, Tom (Ammi) and Bob (Dana) as well as 34 grandchildren and 82 great grandchildren and 3 great-great grand children.

Dale will be missed and forever loved.

The family wishes to thank the care givers and medical staff at Lee Crest Cottage 1 for their attention and gentle care given to Dale during his 26 months with them, as well as Legacy Funeral Home for their assistance.