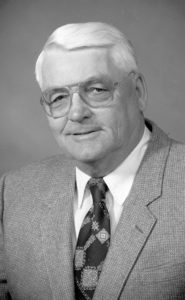 Mr. Thomas Getty of Lethbridge, beloved husband of the late Mrs. Mabel Getty, passed away peacefully at St. Therese Villa on Saturday, December 14, 2019 at the age of 98 years. Tom served as an air force mechanic during the second world war from 1943 to 1945. He married his wife Mabel in 1945 and they enjoyed 74 happy years together prior to her passing in early 2019. They farmed in Pelly Saskatchewan for 28 years before moving to Alberta to tackle new adventures. They bought and operated a grocery store with daughter Janet and Tom continued to work on the farm with son Ken. Even after “retirement” it was a rare day that Tom wasn’t helping on the farm. He was able to fix just about anything and continued to be a valuable asset to the farming operation well into his 70’s. In their spare time Tom and Mabel enjoyed travelling in their motor home and camping with family. Tom and Mabel were also avid curlers in their younger years and enjoyed many bonspiels with family and friends. After retirement they were able to enjoy many trips to the Southern US. Tom will be deeply missed by his three children, Janet (Bill), Ken (Linda) and Shannon (Richard) as well as his five grandchildren, Rachel (Jamie), Jason (Tine), Julia (Lance), Torri and Kyler. Tom is also survived by 5 great grandchildren, Thomas, Emily, Colten, Makayla and Kaitlyn. A private family Graveside Service will be held at the Mountain View Cemetery where Tom will be laid to rest with his wife Mabel. Cremation has been entrusted to Martin Brothers Funeral Chapels.