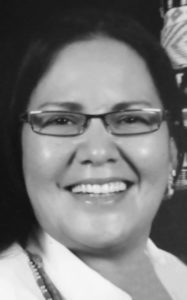 Roxanne was born and raised on the Blood Reserve in Saikois. She met the love of her life Henry and they moved to Cardston where they found their dream home and raised their children together. Roxanne played a big role in raising her grandchildren who called her “Aunna.” She was a loving and supportive wife and mother, a caring and playful grandma and a person to turn to for love, encouragement, and a good laugh.

Roxanne graduated from Red Crow Community College and the Traditional Land Use Study Program (TLUS). She successfully completed an Entrepreneurial Training Program hosted by Siksika Nation. She was not afraid of hard labour as she worked in highway construction for most of her life until an injury prevented her from working with Heavy Equipment. She worked as a TLUS Technician and at the time of her passing sat on the Blood Tribe Lands Appeals Board.

Roxanne loved travelling with her family on the Hand Game trail. She made life-long friends along the way and won championships at Kainai Indian days and at the American Indian Higher Education Consortium as well as other places. Roxanne and Henry travelled together extensively and their most memorable trips were to New Zealand, Hawaii and South Africa. Her interests and hobbies included riding horses, refinishing furniture, working with her crafts and caring for her Chihuahua’s Dakota and Echo. In her earlier days she loved four-wheeling in her big red 4×4 Chevy Monster Truck. She was well known for her backyard mechanic skills; she would be under the truck changing oil and/or doing mechanical repairs while Henry would be inside doing dishes.

She was a stunt woman in Lonesome Dove in the 90’s and she was a proud participant in the Calgary Stampede parade in full Regalia on horseback. One of her most memorable highlights was when she attended Willie Nelson Concert with Henry during one of their travels. She supported the Cardston Peace Camp sharing her traditional and ecological knowledge with the students.

Roxanne loved all her nieces and nephews and was known to them more as a sister than an Aunty. She always gave the family a good laugh especially when the family was going through tough times. Her personality, her humor and her story telling will be greatly missed by all who knew her. With sincere gratitude we would like to thank our extended family and friends, and Henry and Roxanne’s neighbors for the compassion and support they have extended to us. The family would also like to acknowledge Roxanne’s neighbor, Val Shipley, for being there for Roxanne especially after the passing of our dear mother and the passing of her beloved Hailey May. Thank you for always checking up on Roxanne and including her in your craft sessions and group dinners.

Roxanne is preceded in death by her parents Mike and Mary Louise Oka. Hailey May; her grand-daughter whom she missed so much, her brother Peter Oka, brother-in-law Franklin Wells, her sisters Esther (Keith) Rides at the Door, Catherine, Baby Mary, and Gabrielle Oka, and sister-in-law Avaline Marlene Oka.

One Condolence for “OKA, Roxanne”