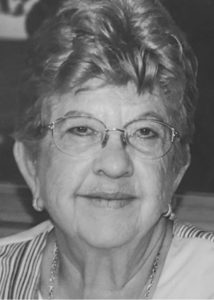 MYRNA JOANNE CHAMBERS, beloved wife of the late Allan Chambers of Lethbridge, passed away on January 3, 2020 at Chinook Regional Hospital, Lethbridge, AB at the age of 76 years.

Joanne was predeceased by her parents, George and Tillie Heather, brothers Jack (Margaret) Heather and Hap (Ethel) Heather; sisters, May (Damien) Corbiell and Donna Gordon and her brother-in-law, Lloyd Jacobson.

Joanne was in born in Bassano, Alberta on July 26, 1943. She was raised in Milo, Alberta where she attended school. In 1961, Joanne married Allan Chambers and they raised three children Brad, Kelly and Laurie in Lomond, AB. Joanne was happiest when she was involved in her community with her friends and family. She had a very special bond with her parents and all her siblings, and valued quality time with all of those special to her.

Joanne belonged to the Armada-Lomond Community Club and was always active in the community. She spent many hours in the Lomond Centre volunteering in the kitchen during figure skating events and hockey games. She truly loved her family and friends in the communities of Lomond and Milo. Joanne also loved the farming life and spent many hours tending to her garden and planted fresh flowers every spring. Her home was always filled with baking, as that was a favourite pass time for her along with endless hours playing with the grandchildren. She also had a passion for reading and always had a book nearby.

Following the Funeral Service, Joanne will be laid to rest with her husband Allan in the Vulcan Cemetery.