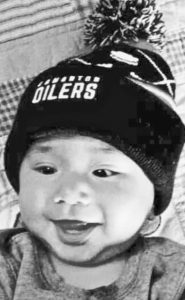 It is with broken hearts and great sadness that we announce the passing of BRAXTON WAYNE BLACK PLUME-GOODSTRIKER in the early morning hours of Tuesday December 31st, 2019 at the age of six months old, in Lethbridge, Alberta.

The Wake Service will be at the White Calf Hall, Standoff on Wednesday, Jan. 8th, 2020 from 7:00 p. m. all night. The Funeral Mass will be at St. Mary’s Catholic Church, Blood Reserve on Thursday, Jan. 9th at 11:00 a.m. Interment in One Spot Cemetery, Blood Reserve.