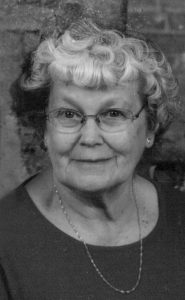 Mrs. Elsie Jean Kaval of Coaldale, beloved wife of the late Mr. Bill Kaval passed away peacefully on Saturday, January 4, 2020 at the age of 84 surrounded by her family. Elsie is celebrated as a wife, mother, grandmother, great-grandmother, sister, sister-in-law, aunt and friend. She was born in Fort Macleod, Alberta on April 20, 1935 to Joseph and Dorothy Evans. Elsie loved golfing, curling, camping, embroidering, needlework, crocheting, knitting and sewing. Her handiwork won her awards from the Women of Unifarm. Elsie graduated from Garbutt Business College in June of 1955 and held bookkeeping positions at various local businesses and organizations. Elsie and Bill had a lifelong career of farming in Readymade. After retiring they moved to Coaldale and spent many summer days at Lee Lake, or at the Boat Club in Cowley. Family is very important to Elsie and she was happiest when she was with her children, grandchildren, and great-grandchildren. She was their number 1 fan in whatever activities they were involved in. Elsie is survived by her son, Joe (Marie) Kaval; daughter, Dorothy (Rick) Siemens; grandchildren Trish (Loren) Lybbert, Jason (Katie) Siemens, Crystal (Tony) Gagnon, Brian (Karry Lynn) Kaval; great grandchildren, Marin and Rylee Lybbert, Justin, Owen and Emily Siemens, Harper and Hazel Kaval; sisters, Dorothy (Clyde) Matheson, Jackie Evans, Eunice David and their families. Elsie is predeceased by her loving husband Bill in July of 2019; parents Joseph and Dorothy Evans; parents in law William and Magdalena Kaval; brother Percy Evans and brother-in-law Ken David. Special thanks to Dr. Jeffrey Steed and Dr. Jennifer Burke for the excellent and compassionate care Elsie received. A Memorial Service will be held at 2:00pm on Saturday, January 11, 2020, at MARTIN BROTHERS RIVERVIEW CHAPEL, 610 – 4 Street South, Lethbridge, Alberta. A private family Graveside Service will be held prior to the Memorial Service. Cremation has been entrusted to Martin Brothers Funeral Chapels. In lieu of flowers, memorial donations may be made to the Canadian Diabetes Association, 1510 2 Ave S, Lethbridge, AB T1J 0G1, or The Canadian Cancer Society, 315 10 Street South, Lethbridge, AB T1J 2M7.