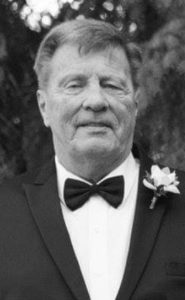 JEAN MARIE ALBERT LOUIS “STEVE” LE BIGOT, of Lethbridge passed away at the Chinook Regional Hospital on December 30, 2019 with his family by his side.

He is lovingly remembered by his daughter, Andrea Bragg of Taber, his granddaughter, Kaela Elaine Corazza (Dino) of Lethbridge, his great- grandchildren, Abigail Shea and Frankie Rose Corazza of Lethbridge and William Scott Bragg. Also left to cherish his memory are his brothers, Joel Felix and Daniel Le Bigot.

Steve was born in Livarot, France and emigrated to Canada with his family in March, 1948 when he was 6 years old. Upon graduation he continued his studies at the Montreal Institute of Technologies for 3 years. He joined the RCMP in 1961 but soon changed fields, joining the military and becoming a member of the Princess Patricia’s Canadian Light Infantry (December 1961 to May 1976). When stationed in Germany, he married the love of his life, Rosel Stadke, on September 16, 1966 and they eventually had two children. The family moved back to Canada on November 24, 1969.

After leaving the forces, he spent 30 years on the road providing for his family. He drove for many great companies including Westcan Bulk Transports, Robins Transport and Trimac with proudly, not a ticket to his name. Steve and Rosel spent 44 years together before her untimely passing in 2012.

Steve enjoyed building and flying remote control airplanes with his two best buddies, Al and Wally. He also found that playing chess with friends and family online, constantly challenged his skills. He loved to read and told great stories; the adventure about when he sat on a bench beside Carl Sagan was told over and over.

However, his most precious jewels were his family and he was blessed to spend his later years always surrounded by them. Munchkin and Abbie brought many smiles to his face but his “Tweet” and her love for him knew no bounds.

Steve was a strong man, lived and played by his own rules. He will be greatly missed and his memories cherished forever.

Private family service will be held at a later date.

“When everything seems to be going against you, remember that an airplane takes off against the wind, not with it”