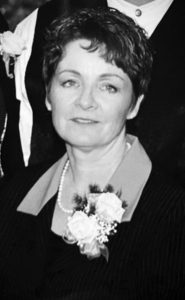 Elizabeth June age 59 of Gull Lake, SK passed away on Friday, January 10, 2020 at the Regina General Hospital. The memorial service was held at 11:00 a.m. on Wednesday, January 22, 2020 from the Old United Church in Magrath, AB with Reverend Eva Stanley officiating. The music was provided by Mary Lee Voort with soloist Trevor Panczak. A biography was read by Dan Twitchen, a life tribute was read by Duke, Kinn, and Denver Wetherelt and Gordon Kozroski, and the ushers were Curtis Winquist and Dustin Godlonton. The honorary pallbearers were Shaelene Price, Briggs Ascione, Abbey Ascione, Chloe Ascione, Aliza Wetherelt, Marley June Wetherelt, Fenway Jack Wetherelt, Veda Ascione and Chet West, as well as all of those who shared in her life. June is survived by her husband Duart (Duke) Wetherelt; her parents Jack and Betty Twitchen; brother Dan Twitchen; sons Kinn (Tera) Wetherelt and Denver (Bai-Lee) Wetherelt; niece Tida Twitchen; seven grandchildren and two great grandchildren. She is predeceased by her grandpa and grandma Twitchen, grandpa and grandma Russell, grandpa and grandma Wetherelt, and grandpa and grandma Soaper. June was born in the Calgary General Hospital on July 28, 1960. She attended school in Magrath and graduated high school in 1978 and then graduated from Olds College in 1981 as a certified farrier. She was united in marriage on April 15, 1978 to Duke Wetherelt in the Magrath United Church. She worked at SWT Inland Grain Terminal and as a book keeper for Jack’s Mechanical in Lethbridge, AB. June served as a secretary and then as president of the Magrath Minor Hockey, and was the president of West Winds Hockey League for five years, as well as a member of the Gull Lake Quilting Club. She enjoyed quilting, gardening, diamond art, she loved riding horses, working with the cows, and her favorite thing to do was spending time with her grandchildren, great grandchildren and family. After a long and courageous battle with Scleroderma and Kidney Disease she passed away peacefully in her sleep. Donations in June’s memory may be made to the Dr. Noble Irwin Regional Healthcare Foundation Inc. – Renal Unit, 2051 Saskatchewan Drive Swift Current, SK S9H 0X6.

Warren’s Funeral Home were entrusted with the arrangements.