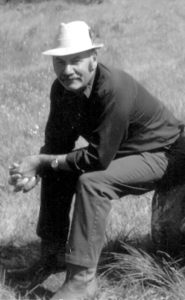 Mr. David Thiessen of Coaldale, beloved husband of the late Mrs. Susie Thiessen, was welcomed into his heavenly home on Tuesday, January 28, 2020 at Chinook Regional Hospital, reaching the age of 100 years. David was born in Orenburg, Russia on June 5, 1919 to parents David and Helena Thiessen. At the age of 11 years in 1930 he immigrated to Canada with his parents and 4 younger siblings. Coaldale, Alberta was chosen as his earthly home where he resided until his passing. David lived a long and fulfilling life; he was disciplined, dependable, uncomplaining and courageous until the end. He was a man of integrity and faith, who exemplified a positive outlook on life. Beginning at a very young age he developed an exceptional work ethic which stood him in good stead throughout his lifetime. He tried his hand at numerous and various jobs ranging from farm labourer to eventually retiring from Inland Concrete as a trucker. Upon his retirement, having led an active lifestyle, David took up golf and curling. He already enjoyed fishing, hunting, gardening, cycling, camping as well as yearly trips to visit his parents and family. He loved ushering at numerous church and community events; meeting and greeting people of all ages. Many years were devoted to custodian work at his church which he excelled at. By meeting up with “The Senate” (his coffee friends) many of the world’s problems were solved!! It was imperative this took place weekday mornings…socializing was a must! On March 27, 1942 David married Susie Harder. They celebrated their 75th wedding anniversary in 2017, quite a milestone. Left to cherish his memory are his sons Victor and Verner; daughters Edna and Wanda (Bill) Clarke; 9 grandchildren; 13 great-grandchildren and 1 great-great grandson. His brothers John, Frank Friesen and Hilda (Cornie) Goertzen. He was predeceased by his parents; brother Leonard; sisters Mary (Ben) Wall, Anne (Henry) Buhler and Helen (John) Harms. David will be deeply missed and lovingly remembered.