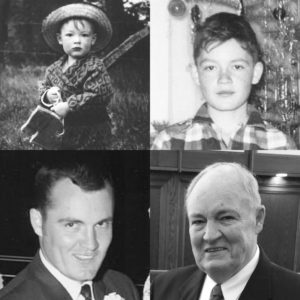 Gordon Duncombe, beloved son, husband, father, grandfather, and friend, passed away peacefully after a long battle of Polycythemia Vera, Pulmonary Hypertension, Kidney Failure, Heart Failure, and a severe brain bleed on February 2, 2020. When he passed, he was surrounded by his family on both sides of the veil and embraced into the loving arms of his Heavenly Father. He fought a courageous battle and never lost his desire to live, work, spend time with his family, and serve others. He was a strong man to the end.

He was born in Lethbridge, Alberta, Canada. He grew up playing basketball, riding horses, and helping at his grandparents’ farm. When he was 19 years old, he served a two year mission for The Church of Jesus Christ of Latter-day Saints in New Zealand. During his mission, he served the people of New Zealand and spread the gospel of Jesus Christ. When he returned, he worked in the Northwest Territories driving heavy machinery through swamps and rugged lands. He also worked on the Northern Pacific Railroad as a brakeman to support himself through college. He graduated from the University of Texas at Arlington with a bachelor’s degree in Business Administration.

Gordon married Mary Pat Hogan on August 28, 1969 in the Idaho Falls Temple in Idaho Falls, Idaho. They began married life in Texas, while Gordon finished his degree. Then, they moved to Lethbridge Alberta, Canada, where they welcomed their first child. They lived in multiple areas of Canada (Calgary and Edmonton, Alberta, Toronto and Ottawa, Ontario, and Saskatoon, Saskatchewan), where Gordon worked as an Economist for the Canadian Government. While in Canada, they welcomed six more children and Gordon held many callings in their church, including Bishop for five years.

They moved to Saint Michael, Minnesota (United States) in 1982, where they had three more children and Gordon started his own tax consulting business. Gordon was a man of extraordinary integrity and developed many strong friendships through his years of business expertise. He was a generous man, who was interested in helping others.

He was a valiant member of The Church of Jesus Christ of Latter-day Saints, where he served faithfully as a Bishop, Temple Worker, Teacher, and more. He lived his life through faith and service.

Gordon had a passion for life. He loved the outdoors and was always dreaming of his next adventure. He traveled to many places, including all throughout the United States, Mexico, Belize, China, British Columbia, England, Scotland, Greece, Israel, Turkey, Italy, Egypt, and more. He lived his life by the motto, “Work hard, play hard.” When it was time to play, Gordon loved to take his children horse-riding, motorcycle riding, boating at the lake, and camping. He took his family on many fun trips, including horse riding and motorcycle trips through the Black Hills, Wyoming, Montana, Colorado, and British Columbia. In 2016, Gordon took his ENTIRE family to Disney World, a trip that everyone still talks about.

He is predeceased by his parents, Udine Sabey Duncombe and Lawrence Lowell Duncombe, his sister Carol Wimmers, and his grandson Daniel Gordon Duncombe.

Funeral Services will begin at 1:30pm.

All services will be held at the Church of Jesus Christ of Latter-day Saints: 9474 Naber Ave NE, Otsego, MN 55330.