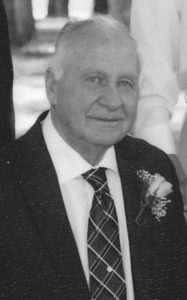 It is with profound sadness and heartbreak we announce the passing of Edward G. Richards, beloved husband of Marilyn Richards who passed away at home of a massive heart attack on February 3, 2020 at the age of 78 years.

Edward, the youngest son of Frank and Evelyn Richards, was born September 9, 1941 and raised on the family farm northeast of Coaldale. Born to be a farmer he loved being on the land, watching his crops grow and enjoyed the challenges the weather brought every year. He attended school in Coaldale graduating in 1959 with a matriculation diploma. He attended the agriculture program at Olds Agricultural College taking two years in one and graduating with honors second from the top of 120 people in 1961. He had an excellent work ethic working hard all his life. He was an excellent farmer knowing everything about the different soils. He was very mechanically inclined. He could fix anything and innovative at inventing ways to improve machinery adapting it to improve his farming techniques. He had excellent Math skills and was sharp at calculating and remembering numbers. “He said farmers have to be able to do math in their head.” He said that he learned and practiced the motto in farming: “Don’t be the first to try something new and don’t be the last.”

He was a past member of the Coaldale Kinsmen Club, the Coaldale Recreation Board and Minor Hockey Association. He was involved with the local Sugar Beet Growers’ Association, The Vegetable Marketing board and the Lethbridge Marksman Club. He was presented with the Max Gibb Award for showing outstanding volunteer service and commitment to the summer games in 1980. He served on the Gem of the West Museum Board for many years. In past years he curled, winning many events, and also has participated in drama presentations. He was adept at skeet shooting, sporting clays and hunting game. He has won many trophies and medals at shooting competitions and wild game was a staple at the Richards’ dinner table. He was a member of the Archeology Association and has much expertise in this field having participated in dugout expeditions when he was fifteen. He was a history buff and loved to read all kinds of history books. Edward had a keen sense of humor and could think off the top of his head with his keen mind. He was also known as a wordsmith. He had a way with words. He loved his family and was very proud of them always extremely happy when his family were around him. He also thoroughly enjoyed hunting with his son Bob and visiting with his friends daily at Tim Hortons. He was a proud member of AA for 34 years helping others as much as he could.

The Funeral Service will be held at The Church of Jesus Christ of Latter-day Saints, COALDALE CHAPEL (2216 – 21a Ave. Coaldale), at 1:00 pm Saturday February 8, 2020, with Bishop Ken Pitcher officiating.