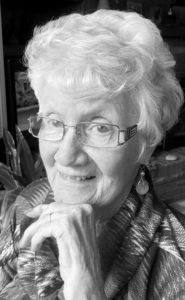 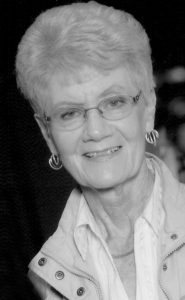 Laura Lynn Lowe beloved wife and best friend of Gordon Lowe went home to be with Jesus early Saturday morning at the Chinook Regional Hospital. Lynn celebrated her 85th birthday last July with friends and family. Lynn and Gord celebrated 62 years of married life in October. Her son Ian and her daughter Ty (Tracey) were the joys of her life. She added to these joys with daughter-in-law Jacquie and granddaughter Ashley. Lynn was predeceased by her parents, Henry and Flora Munro; sister Elaine Rivest and brother John (Jock) Munro. She is survived by her husband Gordon; her son Ian (Jacquie) Lowe; daughter Ty Lowe; granddaughter Ashley Lowe; sisters Leona (Ed) Antoniuk of Edmonton, Heather (Claude) Dalley of Courtenay, BC; and brother Jim (Carol) Munro of Lethbridge. Also, her special niece Debbie (Ev) Bakker and many other nieces and nephews, as well as her husband’s family: the Lowes and the Stenbecks. Lynn, the oldest of six children of Henry and Flora Munro was born in Edmonton and spent her early childhood growing up on a homestead near Busby, Alberta. She attended Prairie Bible Institute for High School. She worked for Woodwards in Edmonton, then attended the Salvation Army Training College for Officers in Toronto. Commissioned in 1955, she held appointments in Olds, Coleman, Lethbridge, Penticton and Cranbrook. While in Lethbridge she met Gordon and a year later they were married. Lynn worked as a secretary for Ringland Meredith Insurance for five years before staying home to raise a family. She then attended the University of Lethbridge as a mature student in the faculty of Education as a music major. At graduation she earned the Wm. Aberhart Gold Medal in Education and was the 1976 class Valedictorian. Lynn taught for Lethbridge School District 51 for seventeen years, first at Allan Watson and then at Park Meadows. She taught grades two and three, taught music to all grades and taught the Gifted and Talented Program. She entered choirs annually in the Kiwanis Music Festival and she introduced handbells to Park Meadows. She formed an adult handbell choir named Bronze Accord. On retirement, her family gave Lynn her own set of handbells and she loved playing handbell solos at church, at senior’s homes, and many summers at the United Church in Waterton, especially for Rev. Alex Lawson Lynn loved Southern Alberta enjoying many summers in Waterton trailering with family and friends. She loved associating with her church family at the Salvation Army. Over the years, she taught Sunday School, was a Girl Guide Captain, choir leader (Songsters), band member and was the church organist for fifty years. Lynn recently completed writing the Story of Her Life: “A Homestead Gal,” an accomplishment of which she felt very proud. Lynn was a 60-year member of the Rebekahs (I.O.O.F.) joining Dominion Rebekah Lodge #41 which later amalgamated with Faith Rebekah Lodge #93. A Funeral Service will be held at 2:00pm, on Friday, February 14, 2020, at SOUTHMINSTER UNITED CHURCH, 1011 4 Ave S, Lethbridge, Alberta, with Colonels Glen and Eleanor Shepherd officiating.

Cremation to follow. Her persona will linger in the coulees west of her Sunset Acres home, where she loved to lie in the sunroom looking out over her prairies to the mountains.

One Condolence for “LOWE, Lynn”