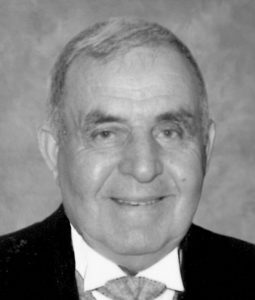 It is with great sadness that we announce the passing of our dear husband, father and grandfather, FERNANDO ROSE, following a three month stay in the Chinook Regional Hospital, on Friday, February 14, 2020 at the age of 90 years.

Marito, Papa and Nonno was a devoted family man, and was ever present in the lives of his beloved wife Antonietta Rose who he met in 1961 and married in 1964. They were blessed with two children Tony (Camille) Rose and Francesca (Brent) Morris and four grandchildren Claire, Antonia, Zachary and Alexa who he adored dearly. Besides his loving wife, children and grandchildren, he is survived by his brothers and sisters-in-law: Andy (Julie) Suriano, Frank (Maureen) Suriano, John (Irene) Suriano, Paolina Seitz (Garth Renyk), and numerous nephews and nieces. Papa was pre-deceased by his parents, Antonio and Francesca Rose, as well as six brothers and sisters-in-law: Pasquale (Luisa) Rose, Silvio Rose, Raffaele (Maria) Rose, Rubens (Nerina) Rose, Amerigo (Maria) Rose and Anibale Rose, father and mother-in-law Rocco and Gilda Suriano, brother-in-law Murray Seitz and cousin Alberto Iachetta.

Papa was born May 12, 1929 and grew up in Grimaldi, Cosenza, Italy. As a young man, he served in the Italian Army, regularly entertaining the troops playing his tuba. He immigrated to Canada in 1954 and joined his brother in Kitimat, BC. In 1960, he moved to Lethbridge where he worked for Catelli for a short period of time before joining the staff at the City of Lethbridge Waterworks Department retiring in 1994. His co-workers affectionately called him Papa Rose, Fred, and Freddie.

Papa had a passion for sports; he loved watching the Italian sports channel. He was proud of his Italian heritage but grateful to be a Canadian citizen. He was a founding member of the Italian Canadian Centre where he and Antonietta rarely missed their monthly dinner and dance. Papa will always be remembered as a man of a few words, a family man who always had a smile on his face and love in his heart.

The family would like to thank the homecare staff and nurses Megan, Sam and Nicole C., Dr. Leam and the staff on Unit 5B at CRH, Deacon Frank Peta and Father Sal Ahumada as well as the family and friends for all the food and visits and the staff at Cornerstone Funeral Home.

A Funeral Mass will be celebrated at OUR LADY OF THE ASSUMPTION CATHOLIC CHURCH, 2405 – 12th Avenue South, Lethbridge, on Friday, February 21st at 11:00 A.M. with Father Albert Sayson celebrating.