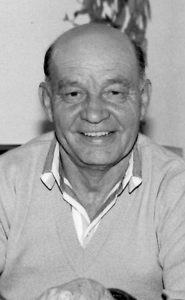 Mr. Wilhelm “Willi” Granson of Coaldale, beloved husband of Mrs. Helene Granson, passed away at the Coaldale Health Centre, on Thursday, February 13, 2020, at the age of 91 years. Left to cherish his memory is his wife Helene, to whom he was married for 68 years; his children, Rudy (Wendy) Granson, William (Denise) Granson and Anneliese (John) Klassen; grandchildren and great-grandchildren, Gregory (Jody) Klassen, and their sons Cache and Colton; Stephen (Christie) Klassen, and their daughters Amara and Taylor; Chris (Lindsey) Barron, and daughters Chloe and Paige; Ryan (Mary) Granson, and their son Mitchell and daughter Hailey; Eric (Jasmine) Granson and their sons Alexander and Jamie. Wilhelm was of German descent born March 14, 1928 in the German settlement Josefstal, Ukraine. In 1943, Wilhelm’s parents with the family fled to the Westfalen area of Germany. While there, he found Helene Heimann, also from Josefstal, Ukraine. They were married May 13, 1951 in Herbern, Germany. They immigrated to Canada in June 1951 and settled in Southern Alberta. Dad was very happy and appreciative of his life in Canada. One of his proudest moments was when dad and mom became Canadian citizens in 1962.

Dad worked hard to support his family, working out of town whenever it was required. He was a highly recognized finish carpenter, working on a number of homes along Henderson Lake. Dad retired at age 60. For his children, he built homes, decks, cabins, fences, corrals, outdoor and indoor furniture, and even a cedar deck for a canoe, which we are proud to own. Dad’s passion was his family and his greatest joy was spending time with his children, grandchildren and great-grandchildren. Coming a close second was fishing. The family enjoyed many camping and fishing trips together. Dad and mom did everything together from butchering, canning, baking keeping the driveway clean, and especially gardening. They were well known for the best tomatoes in Coaldale, and were thrilled to receive the Community in Blooms award the summer of 2008. The family would like to thank the staff of the Coaldale Health Centre for the compassionate care given to our father over the last 2 years. A Memorial Service will be held at 2:00pm, on Tuesday, February 25, 2020, at MARTIN BROTHERS RIVERVIEW CHAPEL, 610-4 Street South, Lethbridge, Alberta. A private family Interment will take place in the Coaldale Cemetery.