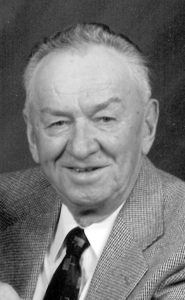 John Gergel, beloved husband of the late Jean Gergel, passed away peacefully in Lethbridge, Alberta on February 18, 2020 at the age of 94 years. John was born in Kostice, Czechoslovakia on September 9, 1925, the eldest child of John and Theresa Gergel. John is survived by his four sons, Rodney (Maureen), Leslie, Darren (Rosemary), Allan, ten grandchildren and nine great-grandchildren. He is also survived by his sisters, Theresa Papworth and Lillian (John) Davies. John was predeceased by his parents, John and Theresa, brother Jack and grandson Jason Gergel. John was just over two years old when his family immigrated to Canada in 1928, settling near Raymond where his extended family worked on local sugar beet farms. In 1932, John’s family bought an eighty-acre farm near Turin and moved into a small one-room house. The family grew and their farming operation expanded with the purchase of more land. John loved old-time dancing and met his future wife, Jean Arthur, at a dance held in Iron Springs. They married on November 18, 1952 in Lethbridge and honeymooned on a car trip through the United States. Their family grew with the arrival of four sons, and the farm grew as well. John and Jean worked very hard on their farm until they semi-retired to the Uplands neighborhood in Lethbridge in 2001. They continued to enjoy dancing, dining and spending time with their many grand and great-grandchildren. John fully retired from farming several years later. John will forever be cherished in our hearts as a loving father, grandfather and brother. We would like to express our sincere gratitude and thanks to Sharon and the entire Cedar Creek Adaptacare staff for the tireless care and attention they provided to John over the past four years. A Celebration of John’s life will be held at 11:00am on Monday, February 24, 2020 at MARTIN BROTHERS RIVERVIEW CHAPEL, 610 – 4 STREET SOUTH, Lethbridge, Alberta. Friends may visit with the family at 10:00 am prior to the service. Interment will follow at Mountain View Cemetery. In lieu of flowers, donations may be made to a charity of your choice.