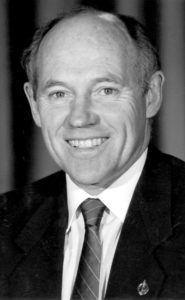 Blaine was born to Madeleine and Herbert Thacker on January 11, 1941. He was raised in Burdett. He went to high school in Bow Island then to Olds School of Agriculture. From Olds he went to the University of Calgary and the University of Alberta. He graduated from Agriculture in 1964. Blaine entered the Faculty of Law in 1964 and graduated in 1968. After he graduated, Blaine joined Virtue and Company in Lethbridge and became a member of the Law Society of Alberta. In 1974 he became a partner at Virtue and Company.

After leaving politics, Blaine returned to practice law with Torry Lewis Abells and taught Canadian Government at Lethbridge Community College. In 1995 he was appointed Sitting Justice of the Peace. In 1997 he and Sue joined World University Services to teach at CanTho University in Vietnam. They lived in Vietnam for two years; Blaine taught in the School of Economics and then the new Faculty of Law. Although Blaine moved back to Lethbridge in 1999 he returned to Vietnam to teach law during the winter semester for three years.

Blaine was always interested in public service. He was especially fond of his service with the University of Lethbridge; he served as Chair of the University Board of Governors from 1974 to 1978. In 2006 the university presented Blaine with an honorary Doctor of Laws.

Blaine was predeceased by his parents and his sister, Gail McNeely. He is survived by his wife Sue, his brother Herb (Marilyn) Thacker, his brother-in-law Blair McNeely, his children Todd (Erin) Thacker and Tynan (Mike) Thacker-Dwyer; his step-children David and Michelle Hampson (Karl Mini), his grandchildren Amanda, Amara, Addison, Mason, Charles, Cayman, Rowan, Rosie, and Meredith and his great-granddaughter Everly.

Blaine was honoured to serve the people of Lethbridge. He believed in good people working together to find solutions for difficult challenges and was always willing to listen respectfully to those who saw things differently. He was grateful for his large extended family and his wonderful friends. He loved to spend time outdoors and enjoyed fly fishing. He was a proud Albertan and a proud Canadian.

Information on a Celebration of Blaine’s Life will be given later.

One Condolence for “THACKER, Blaine”