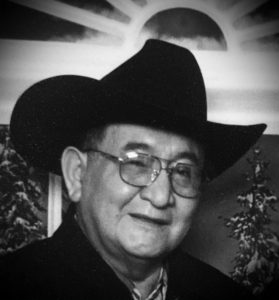 DOMINIC FLOYD CROSS CHILD SR. (ONNISTASSTATSIKAPOYI – Buffalo Calf Standing Center of a Stampede) was called back to the Spirit world on Thursday, March 5, 2020 at the age of 82 years.

Born on August 24, 1937 to Annie Many Bears and William Cross Child, Sr., Dominic was the fourth child of a family of 12 siblings: Ray, Patrick, Madeline, William Jr., Theresa, Fred, Nadine, Ted, Adeline, Ross and Nora. He was raised at the age of three by his uncle Bruised Head who was brother to Poonah, Dominic’s grandmother who was a well-known medicine woman. As a child, he lived amongst elders and later often spoke of his experiences living with ceremonialists and healers. He encouraged the spiritual way of life for his children and grandchildren and stood proudly by them as they joined the various societies. In his early life, he enjoyed participating in the local sports of track and field, pool, match racing, chuck wagon racing, rodeo and horseshoe pitching. He was a renowned Pool Shark and Horseshoe Pitcher.

He attended St. Mary’s Residential School and upon completion, married Dorothy No Runner. Together they raised their children and grandchildren until Dorothy’s passing in 1984. After the loss of his wife, Dominic kept his family strong and never wavered in his expectations of his children. He kept closely connected to his children throughout his lifetime. He became husband to Katherine (Across The Mountain) with whom he happily spent the last 23 years of his life. The family gives much gratitude to Kathy who took excellent care of dad during their years together. Dominic often remarked on how fortunate he was to have found another great companion to share his life.

Widely known for his exceptional gift of composing and singing Pow Wow songs, Dominic led the Pow Wow path for his family. Always so honoured to share his talent, Dominic willingly gave of himself, passing the tradition onto whomever sought the knowledge. He travelled the Pow Wow trail extensively with his family of drummers and dancers. The contribution of songs he composed and sang brought Indian House Recordings to famously record Old Agency Drummers Volume 1, Old Agency Drummers Volume 2 and Kai Spai Drummers and Singers. He was so proud to witness his children and grandchildren become accomplished singers and dancers. He will be missed by the Rocky Lake Singers, his last drum group that travelled many miles together and rocked the Pow Wow trail.

Dominic was a kind, generous, and gracious man. Above all, his sense of humour will be especially remembered by all. His love for Bingo brought him to attend Bingo at every bingo hall regardless of his declining health. He is now in Bingo Heaven and his comrades will miss him. Dominic was employed throughout his lifetime both off and on the reserve, he spent many years with the Fort Macleod Plywood plant, Superette Butcher, Blood Reserve Bus Co-op, Blood Tribe Recreation, and retired from Blood Tribe Public Works. Dominic will be missed by the many relationships he made throughout his lifetime.

He was predeceased by his wife, Dorothy; his sons, Alvin, Robert and Monte; his grandson, Dugan; his parents, Annie and William Cross Child, Sr.; and his siblings, Raymond (Beatrice), Patrick (Theresa), Madeline (Stan), Theresa and Fred.

Following the service, Dominic will be laid to rest in Old Agency Cemetery.