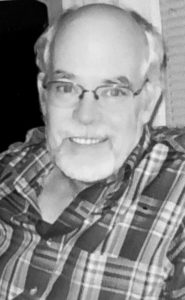 We are heartbroken to share that we have lost Jack—Dad, brother and ‘papa’—suddenly and unexpectedly this past week. In many ways he was heartbroken too, since the death of his son Daniel in 2008, and since the love of his life, wife Trudi, became ill with early-onset dementia in the last few years. This sweet, shy man is survived by Trudi, their daughter Jen O’Connor, and her children Jordan O’Connor (John Morin) and Mason Crawford, as well as Daniel’s children Jesse, Spencer and Caley O’Connor. Jack also leaves behind two sisters Kathleen Stuckert (Terry) and Shannon Spenceley (Bill), sister-in-law Holly Wight, two great grandchildren, James and Brooks Morin, as well as niece Alexandra Cattoni, and nephews Eric Cattoni and Ted Spenceley. He was pre-deceased by his parents Mary O’Connor-Coutts and Patrick O’Connor, sister Maureen, and of course his son Daniel. Jack was a wizard at all things electronic, and his basement was always buzzing with beeps, bings and buzzes that the rest of us would roll our eyes at as he patiently explained what these things were indicating. He was always very bright, and his mom Mary used to brag that his teachers had trouble keeping Jack interested in the same materials his classmates worked on—so his teachers got him into university calculus in middle school. He eventually studied at SAIT and graduated as an electrical mechanic, married his beloved Trudi and had Jen and Dan, and worked at Hagen’s Electric for over 40 years– only retiring when Trudi became ill in 2016. He had an absolutely hilarious, witty sense of humour, and a keen interest in the politics of the day—he and kid sister Shannon enjoyed summarizing the state of the world over coffee over the last few years—and sharing their reviews of the latest Star Trek movie or series. He was also so proud of his family—he would softly brag about his daughter Jen becoming a Registered Nurse in 2016, privately marvel at the accomplishments of his grandchildren, and although he never met Brooks, he would joyfully snuggle little James with Trudi at his side. He was kind, shy and generous—and would blush furiously when you hugged him or told him you loved him—which we did often anyways! In these last few years, Jack was devoted to the care of his dear wife, even as he battled depression and alcoholism. His laughter became rare, and we all struggled with how to best help him. We can only hope he is finally at peace. We write these words as a reminder to always keep the lines of communication open with the ones you love, keep trying to help even if it is rebuffed, and express your love often (even when it is received with discomfort). At Jack’s request, we will be holding a private family gathering at a later date.

One Condolence for “O’CONNOR, John”