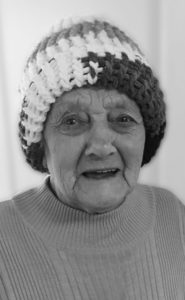 IRENE KACIK passed away at the Coaldale Health Care Centre on Sunday, March 15, 2020, at the age of 93 years, after a lengthy stay in hospital.

She is lovingly remembered by her many friends.

Irene was predeceased by her parents, Mary and Paul Kacik and her brother Paul.

Irene was born on November 7, 1926, in Czechoslovakia and came to Canada with her mom in 1938 to join her father who had settled in the Readymade area.

She remained in Readymade for most of her life and farmed with her parents and then with her brother. While living on the farm she took great care of many different animals including chickens, cats, ducks, dogs and even the owls who had made her yard their home. This was not unusual as she would look after any animal that came into her life including the cat that was dropped off on her doorstep that she lovingly named “City Slicker”.

After her brother passed away she continued to live on the farm and kept up a very impressive garden for several years. She eventually moved into Coaldale where she lived on her own until January of this year. Other than gardening and animals her passions were crafting and baking, two things that she excelled at. Her plum buns and cream rolls were legendary among friends and will be greatly missed along with her fun-loving personality.

She was truly young at heart and loved to laugh and joke around with close friends.

Thank you to the staff of Unit 3B of the Chinook Regional Hospital and of the Coaldale Health Centre for their compassionate care.

At her request, a private service will be held to celebrate her life.

One Condolence for “KACIK, Irene”