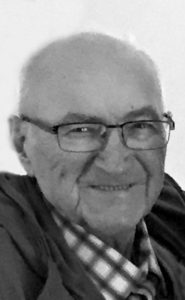 Stanley “Stan” Vavra of Lethbridge beloved husband of Ann, passed away suddenly, after a brief illness, on March 17, 2020 at the age of 82 years. Besides his loving wife Ann, Stan is survived by his 3 children and their families, Mark (Lori) their children Kyle (Chelsey), Kristy (Trent), and Brianne, Chris (Karen) their children Kailey (Curtis) Jakober and their daughter Raylee, Courtney, and Karissa (Scott), Louise (Jack) Peacock and their children Riley (Jasmine), Taylor, Cole (Erin), Austyn and Shaye (Lindsay). Also, brother Steve (Murdeen) Vavra and family, and numerous relatives in Slovakia. He was predeceased by his parents Louis (1960) and Bertha (2009). Stan was born in the Slovak Republic (formerly Czechoslovakia) on October 28, 1937. At the young age of 9 months Stan was brought to Canada by his family in hopes of a better life. They settled in the Picture Butte Area. Stan grew up a farmer. Farming as a young man beside his father, mother and brother, then beside his wife, sons and grandsons until his passing, Stan farmed and owned land in the Barrhill, Keho Lake, Magrath and Cardston areas. Stan was a devout Catholic, faithful, hardworking and fun loving- to name just a few of his great qualities. He greatly enjoyed his family and friends, telling stories and making people laugh, over a beer or a “Snort” of whiskey. He enjoyed making people laugh up until his very last day. And Stan was especially proud of his grandchildren, and great granddaughter. Despite his busy life, Stan still found time to serve his community on various boards and organizations. And after moving to Lethbridge in 2012, Stan and Ann became involved in many Lethbridge Social and Dance clubs- making new friends and filling their social calendar with many fun afternoons and evenings. Due to current COVID-19 concerns a private Family Funeral Mass will be held, with Father Ian Gagne officiating. A Celebration of Stans life for family and friends will be held at a later date to be determined. Flowers are gratefully declined, and for those who wish, Memorial Donations can be made to a charity of one’s choice.