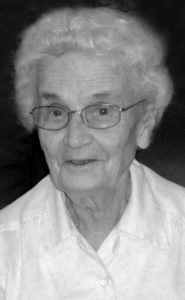 Josephine Prozniak, beloved wife of the late Andrew Prozniak, passed away at St. Therese Villa on March 17, 2020 with her son and daughter at her side. Josephine was born In Poland on February 23, 1921, the fourth of six children. Shortly after her marriage to Andrew Prozniak, the young couple was deported to Siberia where their first daughter was born and died at the age of 13 months. Upon release from Siberia, Andrew joined the British 8th Army and Josephine was sent to a refugee camp in Tanganyika (Tanzania), where she spent the next 6 years. They were reunited in England in 1948 where two more children were born. They immigrated to Alberta in 1951 and have resided in Lethbridge since 1968. Josephine had many talents and her days were full with gardening, canning, cooking, baking, sewing and quilting. She was an active grandmother, spending many hours caring for her grandchildren. Her faith was very important to her and she often reached out to others in need with compassion and generosity. Josephine is survived by her loving family: Zofia (Karol, deceased) Ksiazek and their children Richard (Caroline), Peter (Jennifer), John-Paul, Maria (Dale) Krall; Jozef (Theresa) Prozniak and their children Cara (Mike) Ross, Christine (Savio) Baptista, Andrea (Matt) Koester, Steven (Megan), and Michaela (Kevin) Toews. She is also survived by her great grandchildren: Halina Ksiazek; Fiona, Jeremiah and Jacob Ross; Allison, Emily, Lindsay and Xavier Baptista; Nathan and Tyler Koester; and Andrew and Alexander Prozniak. We would like to express our gratitude to the staff at St. Therese Villa for the care and compassion they have shown to Josephine and to our family. A Private Family Service will be held due to the recent COVID-19 restrictions.

One Condolence for “PROZNIAK, Josephine”