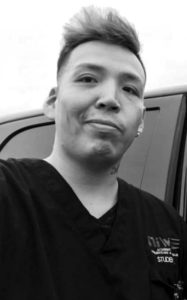 DORIAN “BOSS” CHASE SPOTTED BULL “Ootahkoisksissii o’okito’pi” (Bay Horse Rider) was called home to the creator on March 15, 2020 at the age of 27 years in Calgary, Alberta. Boss was born April 12, 1992 to Melodie Spotted Bull and Preston Day Chief in Cardston Alberta. Boss was the baby of the family and was loved by his older siblings, Carmen (Brett), David (Katie) and Susan (Jay). Boss was a Kipitapokaa and was raised at his grandparents’, Joe and Helen Spotted Bull’s house on the Blood Reserve. Boss acquired many more adoptive parents throughout his life but held a special place in Daniel’s (Lisa) heart where boss attained more siblings, Austin, Kristin and Payton (Dwight). Boss also lived with his aunty Karen, Uncle Mike and cousins Tony (Lacy), Avery and Slade for a period. Boss was always happy to see his uncle Alvin, and cousins Jeff (Jaylene) and Courtney when they came from Calgary to visit. When Boss didn’t attend ceremonies with Joe and Helen, he and his sister Susan, spent numerous days with aunty Harriet at her house. Boss had a fairy godmother, Bernadette Black Water and Boss shared many fond memories with his grandmother, June Day Chief, his siblings, Carter, Shaydi, Taylor and Brittany. He loved his Daychief family.

From the time Boss was young he was Joe and Helen’s traveling companion and traveled to the states on endless occasions to ceremonies, pow wows, and amusement parks where he had many fun adventures with his loving grandparents. Through his traveling he attained many more friends and family in the states at his uncle Nolan’s annual Sundance where he was a fire keeper for his uncle.

Boss loved all his children unconditionally, Melaine, Malaya, Dorian and Draco. He loved seeing his children when he could, and they were bright lights in his life. Boss loved hearing how his children were doing, and he was always proud of all they did. Boss had a memorable place in his heart for all the mothers of his children, Chelsea, Delise and Cyndee.

Boss loved his older siblings, Carmen, David and Susan so much he called or messaged when he could to see how they were doing and he enjoyed hearing about his nephews and nieces, Darnell, Amare, Sunshine, Wade, Tamia, Malia, Thunder and Ocean.

Boss had a dream to open a barber shop one day and was in a program where he was learning hair styling skills. Boss was able to do his daughter, Melaine, and sister, Susan’s hair. Boss seemed to have found his passion. He was very excited every day to be going to school to learn. Throughout his schooling Boss made many more friends with fellow students and clients.

Boss had a lively personality and was able to make many friends every where he went. He loved to laugh and make jokes about anything and everything. Anyone who laughed with Boss can distinctly remember how his laugh sounded. Boss was a kind person who always wanted to help if he could. Boss loved having pets and had many four-legged friends throughout his life. Right through Boss’s life he had many adventures with family and friends, and he had good stories to share of all his experiences.

The Funeral Service will be held at Senator Gladstone Hall, Blood Reserve on Monday, March 23rd at 11:00 a.m. Interment in St. Paul’s Cemetery.

Condolences may be sent