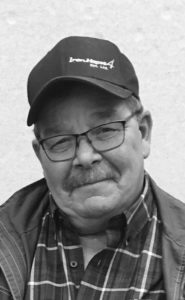 EUGENE GEORGE DUTCHAK passed away peacefully on March 25th, 2020 in the Lethbridge Regional Hospital surrounded by his wife and children. Eugene is survived by his wife Cheryl, his two children Shelley (Brad) and Jeremy (Dallyn) and his precious grandchildren who were his pride and joy, Jaidyn, Camryn, Lincoln, Greg and Nashville. Eugene is also survived by his siblings Carole (Will), Georgette (Rick), Peter (Bonnie-Lou) and Bill. He was predeceased by his sister Kathy and his parents George and Emily.

Eugene was born on April 17, 1956, in Medicine Hat, Alberta and completed his education in Enchant and Vauxhall. He had a wonderful sense of humour, quick wit and loved a good Ukrainian joke. If you thought you were going to talk to him for 5 minutes you would be pleasantly surprised when you are still there a half an hour later. The boy liked to talk!!!

Eugene was a very intelligent, well-read person and his dream was to become a political journalist. But his heartstrings took a tug and he knew that his real love was farming. He was proud of the fact that he lived on his grandfather’s family farm which saw 5 generations and 100 years.

Eugene was very involved with Jeremy and Shelley’s sports. He travelled thousands of miles and several provinces and watched with pride as they participated in the various sports they played. He continued this same dedication with his grandchildren. His entire family shared his love for the Edmonton Oilers and the Toronto Blue Jays.

Eugene was the Rock of the family. He was blessed with strength, integrity and honour. His life was a blessing and he was loved beyond years. He made all of us better people and we are honoured to call him Dad and Grandpa.

Cremation, with interment at a later date in the Enchant Cemetery.