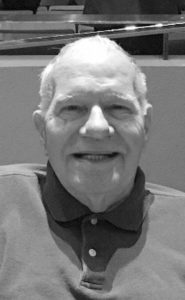 Glenn Joseph Fosbender, known as Joe, passed away on March 22, 2020, at the age of 89 years, in Lethbridge, Alberta. He was born on July 16, 1930 in Danville, Illinois to Glenn and Mary (Plummer) Fosbender. Joe grew up in Toledo, Ohio and graduated from Libbey High School in 1948. After high school he went to work for the New York, Chicago & St. Louis Railroad Company, known as the “Nickel Plate Road” in Toledo. During the Korean War, Joe served his country in the United States Army as a radio operator for two years. He spent 17 months serving overseas in Okinawa, Japan. After Army service, Joe returned to Toledo and resumed working with the Nickle Plate Road. He worked his way up to locomotive engineer and managed the Clover Leaf Credit Union. Joe retired from Norfolk Southern Corporation in 1990 after 40 years of service. Joe married Judith Ann Morton in 1958 in Cuyahoga Falls, Ohio. Joe and Judy were happily married for 61 years. While living in Toledo, Ohio and Temperance, Michigan, Joe was a member of Broadway United Methodist Church and worked as their custodian to help maintain the old building. In 2000, Joe and Judy moved to Lethbridge, Alberta to be closer to their youngest daughter Janis and her family. Joe became very involved with the Kiwanis Club of Lethbridge. He enjoyed serving the community through Kiwanis activities and developed many fond friendships which lasted the rest of his life. He became a dual US and Canadian citizen in 2015. Besides his loving wife Judy, Joe is survived by his daughters Lynn Fosbender (Colin Smith) of Kalispell, Montana; Julie Fosbender (Kieran O’Malley) of Elkins, West Virginia; Lisa Fosbender of Spokane, Washington; and Janis (Scott) Crighton of Lethbridge; his grandchildren Mary and Tristan O’Malley, and Joey and Sam Crighton; and his loving nieces, nephews and other numerous relatives. Joe was preceded in death by his parents, Glenn Fosbender and Mary Fosbender Kerstetter, step-father Howard Kerstetter, and sister Janice (Fosbender) Nowak. A private service for family and friends will be held in the summer to celebrate Joe’s life.

Memorial gifts and donations may be made to the Lethbridge and District Humane Society, 2920 16th Avenue North, Lethbridge, Alberta T1H 5E9.

Visit www.mbfunerals.com to send a condolence