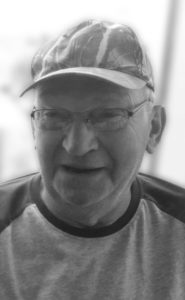 LARRY SZABO, beloved husband of Roz Szabo, passed away at Foothills Medical Centre on Saturday, March 28, 2020 at the age of 69 years.

He is lovingly remembered by his daughters, Selina (Ryan), Nikki (Dustan) as well as his grandchildren, whom he adored, Mason, Holden, Audy and Everett. He will also be missed by his sisters, Carol (Nels), Pat (George), Kathy (Decker), Judy (Dale), Janet, Wendy (Larry), as well as his best friend, Jerry Carter and many more friends and family.

After “growing up” in Stirling playing cat and mouse with the RCMP, he moved to Lethbridge. Here he married his ‘lady friend’, Roz, in 1976 and learned many trades working construction before joining the City of Lethbridge. He worked several departments within the City, making lifelong friends who always made sure he didn’t get lost in any alleys.

Larry had a green thumb and enjoyed spending time in his garden and growing flowers. He was an avid sports fan and rarely missed a game his children or grandchildren played. Larry was a loving, friendly and generous person who would say hi to strangers, talk anyone’s ear off and loved his family – especially his grandchildren – who were the biggest joy in his life.

As a result of the government restrictions, we will be having a celebration of life at a later date. In memory of Larry, donations may be made to S.T.A.R.S (Box 570, Calgary, AB, T2E 8M7).

One Condolence for “SZABO, Larry”