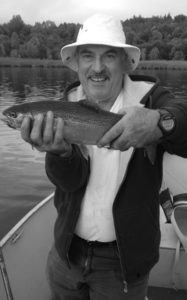 It is with great sadness that the family of Bob Hayes announces his passing after a long and courageous battle with prostate cancer, at the age of 74.

Bob will be lovingly remembered by his wife of 52 years, Sharon (Ness) and his children, Joey (Michelle), Johnny (Kyla) and Julie (Stan). He will be greatly missed by his grandchildren, Zachary (Alexandra), Emily, Jasmin (Bryce), Zoe, Tyler, Justin and Kierra; great-granddaughters Elise and Evony; by his sisters Sandy, Rosie, Maude and Dorothy and their families; and a large extended family, mother-in-law Marie, sisters-in-law Connie, Debbie (Ken) and brother-in-law Allen (Shirley) and many nieces and nephews.

He was predeceased by his parents, Bill and Florence, brother Elmer, father-in-law Clifford, sister-in-law Judy and brothers-in-law Wayne and Jack.

Some of Bob’s best days throughout his life were spent on Northern Alberta lakes perch fishing, or picking berries for his homemade crisp. He was adventurous and had many interests including gardening, wine-making, painting and woodworking.

Bob’s lifelong love of hockey whether as a player, a coach (“was coaching just as good from the parking lot?”) or as a fan allowed him to travel, build life-long friendships and create special memories with his family.

In lieu of flowers, Bob would have appreciated that a donation is made to a charity of your choosing.

The family does plan to hold a Celebration of Life in the near future in Sherwood Park. Details will be shared closer to the date.

One Condolence for “HAYES, Robert”