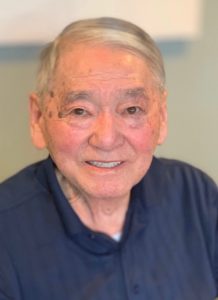 Tommy (Mutsutomi) Medoruma passed away peacefully on April 9, 2020, just days before his 96th birthday. A virtual gathering was held recently via Zoom, where all his extended family were able to be with him for one last visit.

Tommy was born in Hardieville on April 17, 1924, the third child of Kana Sakiyama and Bokujin Kanashiro. When he was 2 months old, his mother passed away and he was adopted by Isamu and Nobuko Medoruma. Nobuko took Tommy to Okinawa for three years when he was a young child. They returned to Canada to live on the Johnson farm between Picture Butte and Iron Springs, where he attended Huntsville School.

In 1949, he married his high school sweetheart, Sumi Sugamori. During their 69 years together, they lived for many years in Hardieville before moving to Lethbridge in 1966. After he retired, they lived at River Ridge Condominiums until moving to Calgary in 2014, to live at McKenzie Towne Retirement Residence, then most recently at AgeCare Seton LTC.

He was an avid Blue Jays fan, and liked to go to the casino and horse races, but most of all, he loved family parties, where he knew there would always be Japanese food, Coke and ice cream. His grandkids held a special place in his heart, and he captured theirs with his magic and card tricks and witty sense of humour. He was their biggest supporter and fan, going to baseball and soccer games, recitals and school functions. They were also his biggest fans, calling him the coolest Grandpa around. Even at 95, he could still rock a ball cap, hoodie and shades.

Tommy was easy-going, loved for his happy and friendly nature and was known for being a “genuine nice guy”. You could always count on his acknowledging wave and big smile as soon as he caught sight of you or heard his name called.

Our family is grateful to the staff at AgeCare Seton for their exemplary care and kindness shown to our parents and we thank Granddaughters Personal Care, especially Huy, for their support. A special thank you to all the healthcare workers and others providing essential services to our communities during this difficult time.

A gathering to “Celebrate Tommy” will be arranged at a later date. To view and share photos, memories and condolences, visit choicememorial.com If you wish, donations may be made in Tommy’s memory to the Lethbridge Okinawa Cultural Society, c/o Ken Nakama, 31 Heritage Circle West, Lethbridge, AB, T1K 7M8, or to the Lethbridge Food Bank, Crisis Response Fund. (recipient email:2020TommyM@gmail.com)