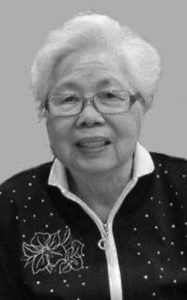 It is with deep sorrow that the family announces the passing of Cuc Trang Luu at her care home in Lethbridge, Alberta on April 15, 2020. She passed away peacefully in her sleep at age 87.

Cuc was born on September 9, 1933 in Chaozhou in the Canton province of China.

After surviving World War II, she moved with her mother to start a new life in Saigon, Vietnam. There, she met and married the love of her life, Tich Chau Luu. Both ventured to a foreign country with modest means, but for the next 2 decades, worked hard to build a happy life together with 4 sons and 3 daughters and a successful restaurant business.

In 1985, after the fallout from the Vietnam War, she emigrated with her family to Lethbridge, Alberta. Again forced to re-build in unfamiliar territory, Cuc and Tich persevered and provided love, support and care, not only to their children, but also their grandchildren. While their kids were now the ones to venture out to make their way, Cuc and Tich provided by helping raise all of their grandchildren while ensuring that there was always a delicious meal on the table by dinner time.

Through the years, Cuc has been able to watch her grandchildren graduate university, meet their own loved ones, and become proud working Canadians. Cuc’s family is so grateful for the years they had with her. Their hearts will be imprinted with her commitment to family and the bi-annual dinners that brought them all home together.

A private Funeral Service will be held to celebrate her life. The family sends a heartfelt thank you to the wonderful nurses, doctors and caregivers at the Chinook Regional Hospital and Edith Cavell Care Centre that warmly and patiently cared for her during these last difficult months.

For those who wish, memorial donations may be made to the Chinook Regional Hospital Foundation, 960 – 19 Street South, Lethbridge, Alberta T1J 1W5.