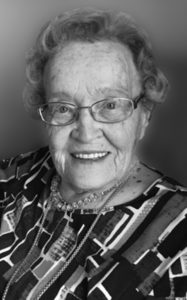 On April 19, 2020 at the age of 93, Lillian Esther Collins-Amlin went peacefully to be with her Lord and Savior after a recent diagnosis of cancer. Lillian cherished life and lived it fully. She was the beloved wife of the late Allan Collins for 46 years and later husband Johnny Amlin for 14 years.

She was born at Medicine Hat, Alberta on May 17, 1926. Lillian grew up on the family farm. She loved the outdoors and spent a great deal of time helping her dad on the farm, collecting the cows, working in the garden, and helping take care of the family home. She married Allan Collins in 1949 and farmed in Skiff, Alberta area, later moving to Lethbridge. She was a woman of many talents, a fantastic homemaker, skilled seamstress, expert gardener, and was known for her great cooking. Her personal motto was “Learn To Do Well” and each activity she was involved with, she did to the best of her ability. She loved working with numbers and accounting. She particularly enjoyed helping the startup of Double A Fertilizer with her husband Allan, and later enjoyed the start-up of Carefree Express with her son and daughter in law. She enjoyed doing the books, banking, and running numerous errands around the city. She took time to write an autobiography entitled “Memoirs of a Prairie Gal.”

Lillian loved her church and faithfully served in various capacities. She helped in the kitchen at church, she was church secretary treasurer for years, helped with Women’s Missionary Society, and was part of the lady’s groups called Priscillas and Silver Threads. She was very involved with the planning and beginning of Prime Timers. She also enjoyed being involved with Southern Alberta Bible Camp.

She is also survived by her brothers Reuben (Ann) Friedenberg, Len (Lorraine) Friedenberg, sisters Theo (Joe) Niessen, and Karen (Don) Fulgham. Her extended family of nieces and nephews will also miss her.

Lillian was predeceased by her husband Allan Collins, and husband Johnny Amlin, and son Howard Collins.

A Memorial Service will be held at a later date.